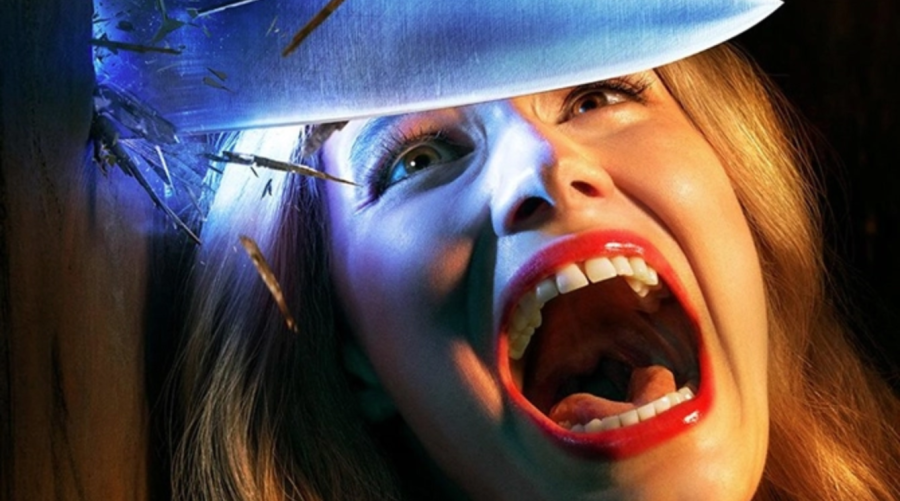 In lieu of October and pumpkin spice season coming upon us, I know we are all shifting gears from summer into fall. At a time like this, with the weather still very hot in North Charleston, we need to put the effort into feeling the season. This may be shopping for seasonal snacks and candles, planning a halloween costume, watching scary movies, etc. For me, fall means American Horror Story season. Although I enjoy a good Ryan Murphy show everyday of the year, this is a particularly special time. Without further adieu, I am going to rank the AHS seasons from worst to best.

Disclaimer: my opinions are very unpopular. I will also be splitting Double Feature, the 10th season, into its two subseasons.

Editor’s note: It seems I accidentally wrote a 9 page essay. Enjoy. Hopefully you’re a fan of the show and will like my in depth analyses. If not, maybe you can get a feel for if it’s something you may want to consider watching in the future. 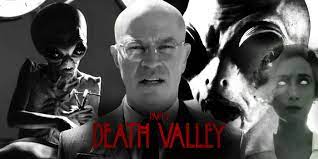 In all honesty, when this season came out I really couldn’t even finish it. So, last night I finally watched the last two episodes. It was so bad that it was almost insulting. By the way, I am referring to part 2 of season 10, Death Valley, only. Anyways, this season was literally so bad that I questioned my brain cells after watching it. I suppose a benefitting factor would be the historical parts, as I will admit I learned a lot about President Eisenhower and JFK which was interesting. The season centered around area 51 and American alien propaganda, which is in theory a good season idea. However, someone on the casting team decided to hire the worst actors I have ever seen in my life for the present day parts of the season. Kaia Gerber is simply not a double threat, and should keep to modeling. The ending was also absolutely absurd. (Spoiler alert, though you should skip this season anyway probably) Imagine watching an entire season about repopulating the world with aliens, and then it ends before they even start. Covid really is no excuse for the release of this. Next. 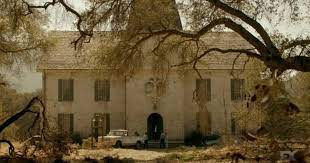 I believe it is not an unpopular opinion to dislike this season, but those who like it usually love it. This season definitely appeals to someone who wants a good scare. It is the scariest season no doubt, and although I enjoy a scare, the overall mood, plot, and creepiness of the season was not for me. The colonial aspects made it very barbaric, as well as the inclusion of the ultra confederate American neighbors. I guess it just comes down to that I wasn’t interested in watching cannibalism or the piggy man. 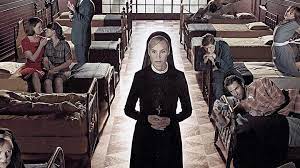 This is by far my most unpopular opinion, but I really did not enjoy this season. I will admit, though, that it is also the only one I haven’t finished. I tried to finish it a multitude of times, but it really bores me to no end. Being a fan favorite, I can see the appeal to an extent, and I know it does not deserve last place in any ranking. However, for some reason I cannot finish it and I see it as one of the most boring things I’ve ever watched. I think I need something a little bit campier. 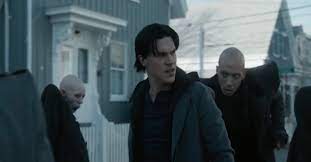 For me, this ranking marks the transition into seasons that I actually do like at least halfway. This season was surprisingly pretty good, and I wish that it made up the entirety of season 10 rather than just half of it. Finn Wittrock is always a pleasure to watch and I enjoyed his upgraded screen time. Also, of course, the return of Evan Peters and his iconic Dolly Parton musical number. The ambience of this season is also really good, the color grading and setting portraying Cape Cod winter perfectly. However, this season has a fatal flaw that is EXTREMELY hard to get past: Ryan Kiera Armstrong. She plays the role of the sociopathic young daughter. The role felt extremely forced, even for a child actress, and her character was so annoying and so prominent that it almost ruined the season completely. 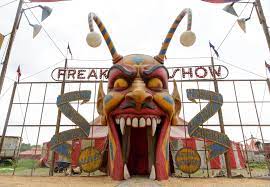 Freak Show is another season I both like and dislike. Jessica Lange’s performance absolutely outsold. I can definitely say I was never bored, and I think this season was really well written and developed. Dandy Mott is still one of the most interesting characters in the whole show to me. I guess the reason that I don’t rank this higher is because of the eeriness and disturbing factors. It feels very old timey in a bad way, like in a prejudiced way. At times it felt suffocating. But, the ending was so surprising and immaculate, making it one of my favorite endings. 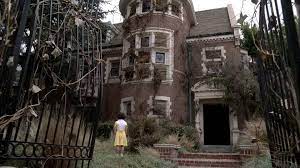 Good. Quintessential season for sure. I don’t have many elaborations. 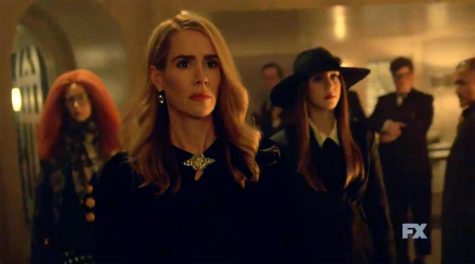 This opinion is also definitely controversial, as I know that when this season came out it was flamed by fans and critics alike. I just watched this show for the first time about a year ago, so my opinions are very unbiased and since I watched all the seasons at the same time, I don’t have an attachment to “traditional” AHS like a long time fan might. People on reddit seem to hate this season for its unserious theatrics and unconventional storylines. However, this is exactly why I like it. It is spoofy and inconsistent, while first being about the end times and then becoming a coven part 2 and then becoming an antichrist origin story. The tie-backs to other seasons were also so cute. Camp. Love it. 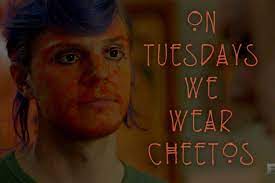 I don’t want to hear anything about this ranking. This season was good. It was a great mix of humorous and scary, and provided some interesting social commentary. I looked up some criticisms to address, and one of them was that it watches like sociology 101. I’d imagine the sociological tropes portrayed are quite cliche, but I think that was the point. The season is meant to display, in an outrageous sense, mob mentality in America through politics and the 2016 election, so of course it’s going to come across as obvious. Aside from the base plot, the storylines following artist Andy Warhol and radical feminist Valerie Solanas as well as flashbacks of infamous cult leaders were really interesting and surprisingly informative. I say this because the series tends to teach me about really random true events. I had no idea who Valerie Solanas was before I watched Cult, however it turns out the story, such that she shot Andy Warhol in the name of feminism, is actually true. Or maybe this is common knowledge but it is interesting nonetheless, and I love how Murphy is always portraying real events that are super interesting and obscure within all of his media.

For starters, just look at these posters. Truly incredible. They exemplify outrageous 80s cheesy slasher horror (a wonderful genre), as does the season itself. Knife killers, northern California, summer camp, jazzercise, the night stalker, leg warmers, windbreakers. It is truly a period piece. The plot is also super well developed and this season actually has one of the best castings in my opinion, although show regulars Sarah Paulson and Evan Peters sat this one out. Cody Fern, Billie Lourd, Leslie Grossman, Gus Kenworthy, Angelica Ross, and, of course, Emma Roberts all brought something to the table. Everything felt fresh and full of excitement the whole time. I should mention, though, that (trigger warning) Matthew Morrison is part of the main cast. 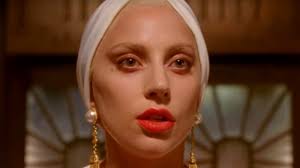 Although Lady Gaga is reason enough, there are many reasons I love this season. If you’ve watched the show and are wondering how I could place this so high, I will say this: you’re not going to get it the first time. And that’s ok. To really appreciate the art of this season you must watch it two times, consecutively.  My friends and I who watch the show figured this out. The first time, a typical reaction is boredom and confusion. The only way to fully enjoy the season is to have already watched it. The intertwining storylines and plot twists just become so much deeper and make so much more sense that way. Anyway, I love this season. Its development is top tier, the plot is insane, the acting is phenomenal, and the haunted hollywood hotel aspect (being based off the Hotel Cecil) is just so amazing. Also, Liz Taylor. And again, Lady Gaga. 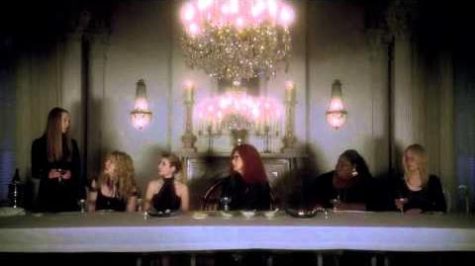 Predictably, Coven is my favorite season. It is scary, it is glam, it is New Orleans; it is femininity, it is witchy, and it is chic. I will say, however, the (true) storylines around socialite/serial killer Delphine Lalaurie are a lot. Definitely not for the faint of heart. I have to skip most of her flashback scenes as they are very harsh. Kathy Bates is an anomaly to me, she plays serial killers a little too well. Nonetheless, I love this season and it is iconic. 10s across the board.

Thank you for reading my rankings. Email me bowsad9762@ccsdschools.com with your opinions! Do you agree or disagree with me?