Everything Everywhere All At Once: A Must See Before You Die

In my humble opinion, this movie is necessary to life

Everything Everywhere All At Once. Despite its expansive title, after seeing this film all I can think of when writing this review is: Where to begin?

Its rating of 97% on Rotten Tomatoes? Its beautiful narrative and unpacking of generational trauma? The way it instantly genuinely became my new favorite film? (And I don’t take that spot lightly so if I’m declaring it outright you know it changed me) There is so much in this film that takes it to my number one spot, and it all starts with one woman. 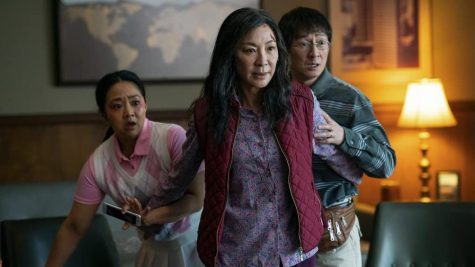 The film’s story centers around a woman, Evelyn, who owns a laundromat with her goofy husband and has a young queer daughter she just doesn’t quite understand. There’s a clear disconnect between Evelyn and her family, as she feels disappointed by them and by her current lifestyle. As she continues on with her everyday life, she finds herself wrapped up in an interdimensional rupture that disrupts her reality and relationships with herself and her family.

The filmmaker duo, DANIELS, made up of Daniel Kwan and Daniel Scheinert, directed, wrote, and produced this film. This is their second feature film after Swiss Army Man, another wholly original and creative concept of a movie.

Everything Everywhere All At Once is labeled as a sci-fi action film, due to its strange interdimensional travel element, but in reality finds itself opening up to be more than just that. The film has levels of wackiness, comedy with a nice touch of absurdism, while still remaining endearing and heartfelt. You can tell that every element of the film was extremely planned and thought out, as something as simple as the fighting choreography was done in a manner that was artful and engaging. Not to mention the film’s composition and production was beautiful. It switched between dimensions and each dimension was well-crafted and as a viewer you felt involved and invested in each one. The costume design and makeup similarly felt very intentional and crafted, with some costumes only being used for a single minute of the film but worked purposefully to characterization. The whole aspect of interdimensional travel itself was easy to follow, with no significant plot holes as can be the case with films that delve into magical realism. The plot is not the most significant feature of the film itself, the highlight instead being dedicated to the fractured family that Evelyn finds herself in, and most importantly, finds herself to be the cause of.

This film held a level of profundity that children and adults alike can resonate with, but especially holds a sure place in the hearts of immigrant families and queer children. The story offers a greater understanding into human connections and what it means to support one’s family, and will surely add to one’s empathy and compassion for others. It speaks not just to the plights of immigrants, but also of the value of kindness and how one does not need to be so hardened by time and disappointment, or pour those emotions onto those around them. My favorite aspect of this was firstly, that going into the film you don’t expect to leave the theater bawling your eyes out and was never marketed as being a drama or tearjerker film, but was instead shown as a movie with a wild and interesting concept. This was significant to me because the concepts that DANIELS covered are embedded in our realities, and are not something we discover through some otherworldly or fantastical idea. They simply used the aspect of interdimensional travel to guide a woman’s understanding of her role as the fracture in her family, a fact which had been entirely prevalent in their lives and relationships. Generational trauma is something that may be overt or subliminal, and DANIELS saw it for what it is in so many families and relationships, executing it beautifully and sincerely. [Somewhat spoilers ahead, but definitely won’t ruin the film experience] I was happy to see that they unpacked this trauma in a manner that did not simply have the parent at fault apologize and reunite with their child, but instead emphasized the fact that one cannot merely apologize for a childhood embedded with issues and emotional trauma, but needs to work to regain understanding and a true place in their child’s life. They need to change before they are accepted. DANIELS understood just that, allowing a reconciliation moment where both mother and child understood their differences but ultimately were united by the love that they have always held for one another, a foundation which allows them to restart and see if their relationship is one worth saving. 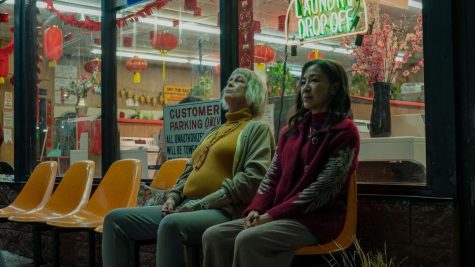 I urge everyone everywhere ever to go see this film, because it genuinely changes your perception of relationships between families or simply makes you finally feel seen and finally experience a moment of catharsis that you may have been waiting for your whole life. Whoever you are, I guarantee this film will make you shed at the very least, a single tear, or if you are like me it’ll release a whole full-body-shaking-hard-to-breathe sob session for the last part of the movie and on the way to your car.

Not to mention that as the credits roll on DANIELS’ masterpiece, Mitski’s new song, “This Is A Life”, written solely for Everything Everywhere All At Once starts to play. I personally had no idea it was going to happen so it just brought me to even more tears as the realization hit that it was Mitski’s voice that was flooding the theater and wrapping me in a warm and emotional hug.

There is no reason not to see this film. I cannot CANNOT recommend it enough. Please go see this.