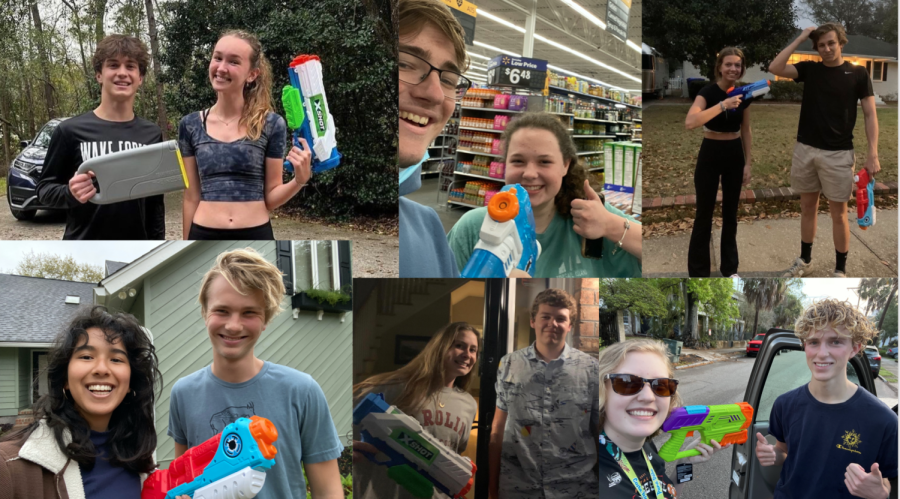 Among the senior class, there has been widespread distrust and deception, every senior suspicious of the others. “What caused this?” you may ask. Well: Senior Assassins. Senior assassins is an event that seniors organize every year in which seniors are given a “target” that they have to “assassinate” with a water gun, while also trying to avoid being assassinated themselves.
Quick Rules:
Every Sunday, assignments are sent out and you will receive your target. You must “assassinate” your target by shooting them with a water gun. If you are assassinated by your assassin, then you are eliminated. In order to move onto the next round, you must assassinate your target and avoid being assassinated. If someone attempts to assassinate you but you are able to shoot them first, then they are out. The only places off limits are school property (including parking lots and sports fields),  workplaces, and inside homes (unless let in by a member of the family). Parking lots of jobs and outside of homes are free game though.
Tips:
Trust no one. Don’t go anywhere anyone tells you to. Be unpredictable with your outings and try to stay home or in safe areas as much as you can.
Always have a water gun on you. Don’t go anywhere without one.
Don’t go anywhere if another person knows that you will be there.
Successful Assassinations (So far):
Round 1:
Monday:

“I set the bait for Caleb and he grabbed it like a fish. I got Augie Hale to tell Caleb that his target, Anna Benson, would be going to Panera Bread after school. SPOILER…. she never showed. After school I hopped in Cal’s car to be deceptive and all that. We proceeded to go to Panera Bread and Cal scoped out the area. He found Caleb sitting in the back of a 4Runner with the rear window down waiting to get an easy kill. Cal managed to seize all the weapons in the vehicle and called me over. Caleb spotted me with my water gun and began fumbling over the seats in the car trying to make a desperate escape. The terror in his eyes was comical. I proceeded to open the car door and heard the whimpers of Caleb as he pleaded for a second chance. I then squirted him twice, eliminating him from senior assassin.” – Alden Klemm

Mia Matthews and Regan Brown assassinated each other

“I assassinated my target on the third try. I went to his house two mornings in a row before finding him at the gym on the third morning.” – Reese Laird

“I got assassinated because I was asked to go to Walmart to pick up snacks for the senior lounge, and when I walked into the snack aisle, Bryce was standing there with a water gun to take me out” -Anson Clark

“I was waiting at Shay’s house to assassinate him, but Teagan, my assassin, knew that I was waiting there, so she decided to come to assassinate me. She and Shay got out of their car and I was hiding behind another car in his driveway. They couldn’t find me, and then I jumped out and assassinated Teagan (in self defense). Shay jumped into his car before I could shoot him. I decided to wait so he agreed to have a duel. I won the duel and got a double kill.” – Charlie Kuyper

“I was assassinated by Alex Levin through quite the scheme. He sent “my new neighbors” (Garrett’s Sister and his brother) to come meet me and my brother because we were the same age. The first day I was not home but my mom fell right into their trap and told them exactly when I would be home the next day. They show up the next day and I go to shake their hands and out pops Alex from the bush by my front porch.” – Reese Laird

“I was following Alden home after trivia night (this was the 5th attempt) and while I was waiting for him to get out of his car, Hallie was hiding behind a recycling bin and shot me in the face. I decided to shoot them anyway because I had tried so hard to get him. ” – Emma Helen Inman