Examining the downfall of Super Gremlin. 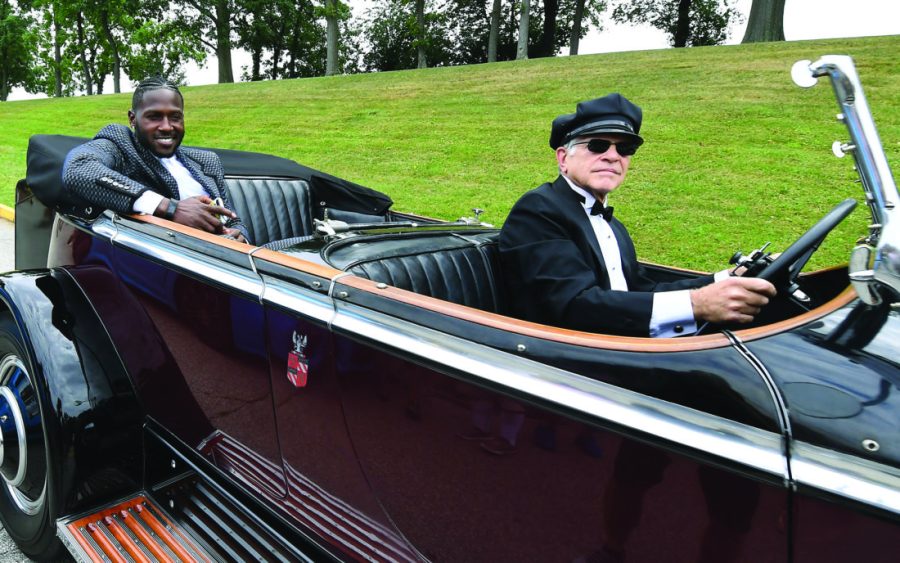 Statistically, Antonio Brown is one of the greatest wide receivers in the history of the NFL. He ranks in the top 25 all time in career receptions, receiving yards, and receiving touchdowns. Moreover, he’s a Super Bowl champion, 4x First-team All-Pro, and 7x Pro-Bowler. The best receiver of the 2010s, all signs would point to Brown being a lock for the Hall of Fame. However, Brown’s case for Canton, Ohio may ultimately fall short as a multitude of issues both on and off the field have clouded his incredible career with controversy.

Just this past Sunday (January 2nd), Brown again made headlines when he stormed off the field during the middle of a game against the New York Jets, tossing his jersey and gear into the stands as he exited. This was just Brown’s second game back after a suspension by the NFL for submitting a fake vaccination card to the league following his contraction of Covid-19. In a postgame interview, Buccaneers head coach Bruce Arians announced that Brown was “no longer a Buc,” leaving many to wonder if this would be the receiver’s final stint in the league.

This is not the first time Brown’s career has seemingly concluded. The 2019 season saw him make headlines several times (covered later in the article), each one further suggesting he may never see the field again. However, in large part thanks to quarterback Tom Brady, Brown’s career was resurrected over and over again. To better understand Brown and his downfall, one must recount the important events on and off the field which led up to Sunday’s fiasco in New York.

During Antonio Brown’s college career, he struggles at times with accountability and character issues. However, he figures it out by the end of his tenure.

2006: Brown is denied admission to play football at Florida State due to academic concerns, instead playing a season at North Carolina Tech Prep. After the season, Brown attempts to transfer and play at Florida International University, but is expelled due to an altercation with campus security.

2007-2009: Brown follows Coach Butch Jones to Central Michigan. Initially, he struggles to adjust to the CMU lifestyle, missing practices and showing up late to team meetings. However, he overcomes these problems and spends a rather drama-free 3 years at the university.

Antonio Brown is drafted in the 2010 NFL draft by the Pittsburgh Steelers. He soon becomes one of the most dominant receivers in the league, a status he holds for several seasons. However, by the end of his time in Pittsburgh, Brown’s issues begin to return.

2010-2011: Brown quietly works his way up the Steelers depth chart and has no instances of controversy or trouble.

2012-2014: Brown, now an established star in the league, signs his first big contract. He taunts teammates at practice, claiming, “Don’t touch me. I’m the franchise.” Nonetheless, Brown still remains drama-free in the eyes of the public aside from a few questionable unsportsmanlike conduct fines. Notably, he “fails” an attempted hurdle and appears to kick Cleveland punter Spencer Lanning in the face.

2015: Brown has the best season of his career, leading the league with 136 receptions for 1,834 yards (both Steelers all-time records). However, in the first round of the playoffs, Brown is concussed on a dirty hit by Bengals linebacker Vontaze Burfict. Many fans and players have cited this hit as the spark for Brown’s downfall. Additionally, those close to the Steelers organization have claimed that the hit changed his personality as he became afraid that other players were “out to get him” and lost his jocular attitude at practice.

2016: Brown immediately starts the season with controversy, receiving fines for violating the uniform policy and twerking in the endzone during a touchdown celebration. Following a playoff victory over the Chiefs later in the season, Brown shockingly starts a Facebook Live in the postgame locker room. During the stream, Coach Mike Tomlin is overheard speaking harshly about their upcoming opponent, the New England Patriots. Brown and the Steelers would lose to the Patriots the following week.

2017: Brown signs a new contract before the season, making him the highest paid receiver in the league. He completes the year drama-free. Fellow NFL players rank him the second best player in the league for the season.

2018: In a week 6 game against the Bengals, Brown is again the victim of a dirty hit by Vontaze Burfict. Throughout the year, Brown and quarterback Ben Roethlisberger engage in several arguments. Brown begins skipping practice and is benched for the final game of the season. The Steelers fail to make the playoffs and Brown requests a trade after the season.

Simply put, Brown’s Oakland tenure is a short-lived disaster. He creates one problem after another before being released by the Raiders.

2019 (Part 1): Brown is traded to the Oakland Raiders at the start of the year. He vows to be a positive contributor to the franchise and chemistry of the team. However, Brown gets frostbite on his feet during preseason cryotherapy treatment and misses much of training camp. Shortly thereafter, Brown threatens to retire from the league as his preferred helmet is banned for no longer meeting league standards. He ultimately does not retire and is forced to wear a new helmet. On September 4th, Brown is restrained by teammates from hitting general manager Mike Mayock, who previously fined Brown for unexcused absences from team activities. Two days later, a rejuvenated Brown apologies for his mistakes and tells fans that he is excited for their approaching Week 1 matchup. However, the next day on September 7th, Brown is released by the Raiders and fined $215,000 by the organization for his altercation with Mayock.

A spiraling Brown is scooped up by the Patriots, who have a history for turning struggling players’ careers around. The move is much to the satisfaction of quarterback Tom Brady, who vouched for Brown to the organization.

2019 (Part 2): The same day as his release from Oakland, Brown is picked up by New England. He is quickly prepared for their Week 2 matchup against the Dolphins, finding instant chemistry with Tom Brady in practice. Brown catches a touchdown in their 43-0 win. However, accusations of sexual and personal misconduct rise to the surface released on September 20th.

Brown appears to finally settle down in Tampa. He wins his first Super Bowl and is lauded by coaches and teammates for his work ethic all season. However, the issues of the last several weeks demonstrate once again that he cannot find stability with a team.

2020: Despite claims of retirement, Brown returns to football alongside the Tampa Bay Buccaneers. Quarterback Tom Brady, who has since left New England and signed with the organization, once again vouches for Brown’s hiring. The receiver is suspended for the first 8 games of the season due to the personal misconduct violations. Nonetheless, Brown has an incredibly successful return to football and wins his first career Super Bowl with the Buccaneers. In the game, he catches a touchdown pass from Tom Brady.

2021: This all leads to the present season. Brown struggles to find the field due to run-ins with Covid-19. After a three game suspension by the league for submitting a fake vaccination card, Brown returns to the Buccaneers in late December. However, in just his second week back Brown strips his uniform off during the middle of the Jets game and exits the field.

In the days following his meltdown in New York, information about Brown and the incident began to surface. First, an instagram model came forward claiming that Brown snuck her into his room in the team hotel the night before the game. A bad look for Brown, he clapped back with evidence of the Buccaneers attempting to cover up an injury to deflect blame for his mid-game exit. According to Brown, he was playing through “broken bone fragments stuck in [his] ankle, the ligament torn from the bone, and cartilage loss.” Allegedly, he told head coach Bruce Arians about the injury before the Jets game, but still decided to suit up and play. Seemingly, Brown would have kept his mouth shut and continued to play through the pain. However, an attempt by the Buccaneer organization to cover up the injury in order to make Brown look worse led him to reveal details of his ankle.

Ultimately, the situation is a bunch of finger pointing with no clear answers. While Brown may be telling the truth about his ankle, his credibility is called into question due to his controversial history. Moreover, he has criticized former teammates since the event, including quarterback Tom Brady, who is largely responsible for Brown even getting a chance to play again in the NFL. Brown has also called himself “an American hero” and been seen sitting courtside at a Brooklyn Nets game, as well as hanging out with Kanye West. Many people have labeled the wide receiver as appearing to be going crazy. At this point, the best thing for Brown is probably to lay low for a bit and avoid making headlines.

When Vontaze Burfict knocked Antonio Brown out in the playoffs, fans pointed to it as the start of his issues. However, it is evident that Brown’s problems both on and off the field predate the Burfict hit. It’s unfair to Brown to speculate about his mental state or evidence of brain damage. For now, following Tom Brady’s message is the best path for fans and for the receiver: “everyone should be very compassionate and empathetic toward some very difficult things that are happening.”