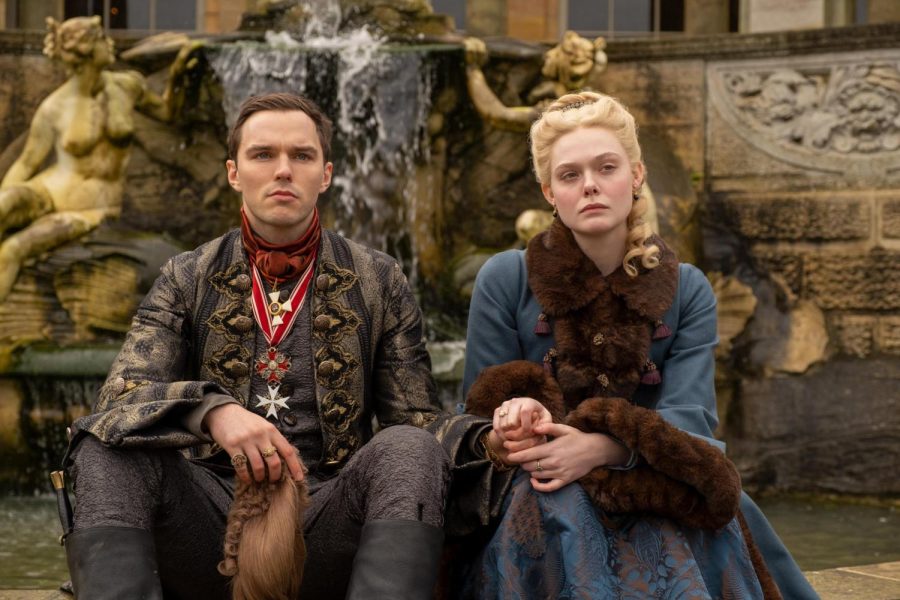 This article includes some spoilers, but if you know of the real story of Catherine the Great, then they’re not really spoilers. I tried to refrain from spoiling any aspects of the show that are not historical knowledge.

While I am not usually one to do TV and film reviews, these past few months have granted me with ample opportunity to procrastinate on my college applications and school work, thus leading me to browse through the numerous streaming services in hopes for a show to distract me from my responsibilities. Although it is not as highly spoken of for its original content, Hulu provided me with the perfect show to bypass the free time: The Great.

And while I do not regard myself to be a “history person” (Mr. Rush can vouch for this), my curiosity was piqued upon finding the 2020 Hulu Original satirical dramatic-comedy that recounts the not-so-historically-accurate tale of the late Empress of Russia, Catherine the Great. Maybe it was the rich British accents that enticed me, or possibly it was the alluring insight into the lives of royals that caught my eye. Either way, whatever drew me to the show knew what it was doing.

Set in 18th century Russia, The Great opens with the marrying of innocent, naïve 16 year old Catherine II to the Emperor of Russia, Peter III. Hoping to aid in the creation of a progressive, greater country, Catherine is quick to learn that her husband’s visions of Russia’s future polarize those of her own, leading her to plan a coup against the emperor. Along the way, Catherine befriends several members of the court, such as her maid Marial and bureaucrat Orlo, who assist her in her ambitious goals. Showcasing the unwonted conditions of life in the court, The Great incorporates various aspects of the royal lifestyle, such as violent disputes, international conflicts, and the debate over women’s rights.

The casting for this show could honestly not be any more perfect in my opinion. Elle Fanning and Nicholas Hoult embody the two leads, Catherine and Peter, respectively. After divulging in some behind-the-scenes videos provided by Hulu’s YouTube channel, I can confirm that their chemistry on the show is still translated even when the cameras are not rolling, which could also be due in large part to them previously having worked together on the 2014 film Young Ones. Both the script and the two’s individual acting bring their story and relationship to life, encapsulating the hardships and success that the two have together.

Furthermore, despite being set during a time and place that was greatly constructed around the idea of white superiority, Hulu did a decent job at creating a somewhat diverse cast. For example, Catherine’s friend and main coup planner, Orlo, is portrayed by British-Indian actor Sacha Dhawan, and British-Nigerian actor Bayo Gbadamosi superbly executed the role of one of Peter’s most loyal friends, Arkady. Additionally, the lover that Peter had gifted to his wife, Count Leo Voronsky, is played by British actor Sebastian de Souza who is son to his Brazilian mother and Indian descent father. A few of the extras and minor characters, such as the women of Peter’s court, are also POC; however, I do hope that in the future seasons there will be more major roles casted to POC since I feel that it is still somewhat heavily performed by white actors.

Also, I find it notable to mention that although the show is what Hulu declared to be “anti-historical,” Orlo is one of the few characters that is actually based upon a real figure in the true story of Catherine the Great: the skillful military leader, Prince Grigory Grigoryevich Orlov, who actually led the coup that dethroned and killed Peter of Russia in the 1760s, which is fairly similar to the role that Orlo plays in the show.

Overall, I give the casting a solid 3.6 out of 5 stars, for I think the leads casted fit very well, but I do hope for more diversity in the upcoming seasons.

I think the costuming was quite literally my most favorite aspect of the whole series; from the everyday court attire to the formal coronation gown, the whole costuming department went above and beyond. Emma Fryer, the main costume designer for season one of the show, told Entertainment Weekly that her and her team fabricated roughly 200 costumes for the first season, all of which were stunning I must say. Turning to 18th century artwork and books for inspiration, Fryer aimed to create looks that were both appropriate for the era, but also had their own modern twist.

I think that the viewers can see the effort and details that went into every character’s look, for even those with more simple clothing, like the serfs, were dressed remarkably and fittingly. The outerwear, too, was incredible; somehow they were even able to make coats look elegant and royal with their jewel tones and textured fabrics.

I think one of my most favorite dresses of Catherine’s was her coronation gown not only because the dress itself was absolutely astonishing, but also because it was such a powerful, influential point in the plot. Despite the popular opinion of those in the court, Catherine chose to wear a garment that connected her back to the nation of Russia and its traditional roots. Seen as outdated and “grandma-esque,” the wealthy women of the court mocked the empress for her attire as she accepted the royal crown of Russia. However, this exact dress is what led to some significant changes in the way the country was ruled and functioned, and it sparked serious change within the social structures of Russia.

The show’s second season costume designer, Sharon Long, told Fashionista, “‘It was just a very slow process of lots of research and a lot of looking at how you can subvert that sarafan [traditional folk sleeveless apron-like garment worn over a dress] and give it a contemporary feeling because [Catherine] has to appeal to the Russian people.'” Constructed out of opulent gold silk, the gown screamed “eloquence” and “power”!

In hand with the costuming, the makeup and hair team did exceptional. The Great’s court is mainly composed of women who take inspiration from the French elite of the 18th century around the time of Marie Antoinette’s reign, so think fluffy, white wigs and exaggerated ball gowns.

For the hair and makeup designer on set, Louise Coles, this was no problem; she had worked previously on shows such as The Crown, Mary Queen of Scots, and Black Sails, all of which incorporate period hair and makeup. I think one of the most fascinating facets of the costuming is the wigs, which were all lavish and extravagant, such as the one that can be seen here to the right. Coles said in an interview with Popsugar, “‘Everyone on set wore a wig … Actually, in order to make the schedules work, everyone had more than one.'” With such a big cast and so many extras, Coles also revealed that “‘it was probably around 500 wigs in total that [they] had throughout the series, maybe more.'”

I think it is pretty clear that I rate The Great’s costuming and makeup department a solid 5 out of 5 stars for all of the hard work and dedication they put into creating the characters.

Despite the series’ storyline taking place in Russia, none of the shots were filmed in the country. Rather, most production occurred in other parts of Europe, such as Italy and England, where they took advantage of the historic royal properties that are scattered around the lands.

The centerpiece of the show and residence of Catherine and Peter, the Winter Palace (which is actually in Saint Petersburg, Russia), is characterized by the former royal estate of Italy’s Royal Palace of Caserta, which is considered the largest palace in the world. Throughout the show, it is used for scenes that take place in the Winter Palace’s interior courtyard, the great fountain in the gardens, the theater, and the marble staircase. The show’s set design team did an amazing job of decorating and adapting the palace to better fit periodically with the show while still maintaining the integrity of the palace.

Additionally, the cast traveled east to Hertfordshire, England to shoot scenes in the Hatfield House, which was constructed in 1611 and is now the property of the 7th Marquess and Marchioness of Salisbury. Numerous scenes and important plot points take place in the Long Gallery of this Jacobean house. For example, this is where the viewers find out that Peter has the mummified remains of his late mother on display. The Marble Hall was also a crucial room for shooting scenes, for this acted as the emperor’s council room. Furthermore, the house provided the exorbitant banquet hall where the court ate their luxurious feasts and laughed at Peter’s immature, crass jokes (or in 18th century-terms: jests). The Hatfield House also served as a set for other shows and films, such as Netflix’s Enola Homes and the 2017 film Wonder Woman.

Hulu also incorporated other English estates, like Castle Howard in North Yorkshire and Hever Castle in the village of Hever, into the show for smaller scenes. I would rate The Great’s scenery a 4.2 out 5 stars. While it may not have been possible to film in the actual Winter Palace of Russia (it is now converted into the Hermitage Museum), I think that having some incorporation of the Russian landscape and country would have made the show that much more enjoyable. Below, I have included an official tour of the Winter Palace from The Great’s own cast, which does a much deeper dive into the set design and prop placements for each of the rooms.

By now, it is probably apparent that I will be rating this show relatively high, but it is with good reason. While I have not watched The Crown or Reign, I find that The Great is a breath of fresh air in today’s media. The show does a fantastic job at converting a historical event into a source of modern entertainment. Averaging out all of my scores for each category, I ultimately deem this show to be worthy of 4.37 out of 5 stars. The show is beautifully executed, and I cannot wait for the third season, which was actually officially announced as of two days ago, January 11, 2022!