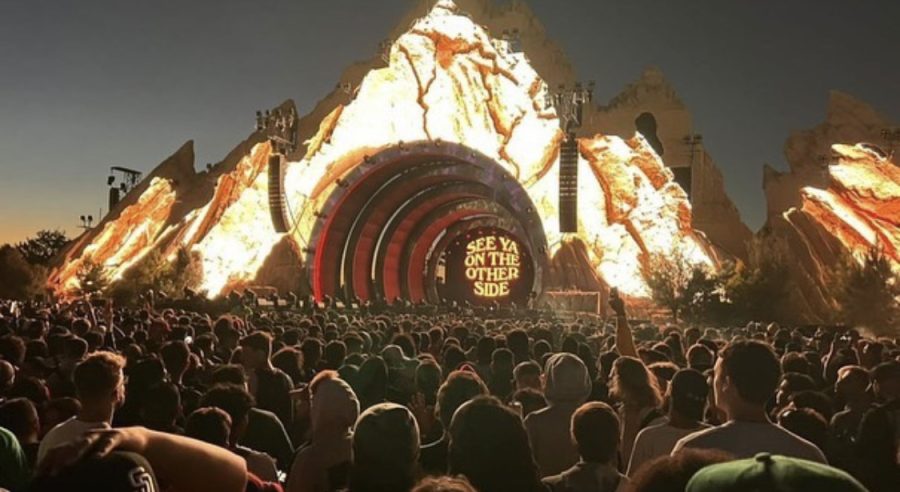 Astroworld, the brainchild of famed rapper Travis Scott, returned this November after a year-long hiatus due to COVID-19. Much like with numerous other events and concerts, many were highly anticipating the two-day music festival and the chance to see some of their favorite artists in person again. However, no one was expecting night one of Astroworld Festival to end the way it did: eight attendees dead and several hundred injured.

What We Know Now

With over 50,000 fans present, an intense sense of energy and adrenaline was radiating throughout the grounds even hours prior to Scott’s opening set, which began shortly after 9:00 PM. Yet, not even a full hour into his set, screams could be heard echoing from the crowd, pleading the performer and those involved with the festival production to stop the show. In an Instagram post following the horrifying night, @seannafaith recalled that “[e]very gap was filled, where your feet were placed was where they stayed,” and “[w]ithin 30 seconds of the first song, people began to drown.” With so many people in attendance, it was nearly impossible to not become one with the crowd; those near the stage were shoved against the barricade and were forced to completely surrender the ability to move their bodies in any manner.

The lack of space and the continuously constricting mass of people toward the stage resulted in some to literally gasp for air. Fans were jolted in every which way, including toward the ground, which is one of the main reasons as to why there are such a high number of injured attendants. Fans recount seeing unconscious bodies scattered on the ground and some even being crowd surfed through the sea of people in hopes of getting them to proper medical aid. In response, individuals began attempting to grab the attention of the event employees, the police, and Scott himself.  As noted by The Houston Chronicle, Scott “stopped multiple times as he spotted fans in distress and asked security to help them out of the crowd.” Yet, even still, the performance continued until being called off at 10:15 PM, which according to the Houston Police, was approximately 40 minutes after the concert was officially declared the site of a “mass casualty.” With over 50 units from the Houston Fire Department responding to the emergency, the crowd was soon flooded with ambulances and EMTs conducting CPR on those insentient, all while the “Sicko Mode” artist continued with his show.

Following the traumatic night, eight people had officially died, dozens were hospitalized, and hundreds injured. The artist’s main demographic of listeners is composed of college students and high school students, and sadly, those who passed ranged in ages from 14 to 27. Both Scott and the Astroworld Festival publicly announced their condolences for those affected, and Scott also stated that he is “committed to working together with the Houston community to heal and support the families in need.” Additionally, Scott has vowed to refund all of his fans who attended and to cover the funeral costs of those who had passed. Nonetheless, countless civil lawsuits have been filed against those involved with Astroworld, including Scott, the Cactus Jack Foundation, event producer Live Nation, event promoter Scoremore, and surprise guest Drake for negligence and the “encouragement of violence.”

The Warning Signs We Missed

Since the events of November 5th, there has been a resurgence of Scott’s past concert issues and his public actions. In fact, prior to the weekend music festival, Houston police chief, Troy Finner, spoke with Scott and his security team to “[ask] Travis Scott and his team to work with HPD for all events over the weekend and to be mindful of his team’s social media messaging on any unscheduled events.” Scott has a discernible history of wild crowds and a somewhat rowdy fanbase, and while mosh pits and lively concertgoers are not necessarily at fault for this past Friday’s tragedy, Scott’s past concert crowds could have foreshadowed some of the violent acts that occurred that night. For example, in 2017 Scott “faced three misdemeanor charges of inciting a riot, disorderly conduct and endangering the welfare of a minor after he invited fans to overpower security and rush the stage” after his concert at the Walmart Arkansas Music Pavilion, as reported by the Los Angeles Times. Furthermore, a video of a fan jumping from a second-floor balcony at Scott’s 2017 concert in Manhattan has been circulating through several platforms of social media. In the background of the audio, Scott can be heard shouting, “I see you, but are you going to do it?” and, “They gonna catch you. Don’t be scared! Don’t be scared!” While he may not be telling his fans these things out of malicious intent, he is still encouraging dangerous and sometimes even illegal behavior. It is normal for artists, especially those who pertain to the rap and rock genres, to hype up their crowds, but there is a fine line that divides what is appropriate and what is out of line.

Beyond the pre-indications that can be seen from the years past, signs of possible disaster could be spotted the day of the festival. Videos and photos spread online of fist-fights and arguments among those at NRG Park as well as footage of several fans rushing past the gates and security checkpoints to get into the festival for free. There was a surplus of unaccounted fans on the concert grounds, which could have added to the unbalanced ratio of security to attendees. Furthermore, The New York Times revealed that “[b]ased on the site’s layout and numerous past experiences, the potential for multiple alcohol/drug related incidents, possible evacuation needs, and the ever-present threat of a mass casualty situation are identified as key concerns.” Overall, the music festival was kind of bound to go awry, but there were definitely a lot that could have been done to lessen the damage over the course of the night.

Who is to Blame?

In light of the tragic news, many took to social media to express their condolences and concerns about Astroworld. Scott became a trending name on Twitter, but not in a good light. A lot of now-former fans are calling on others to stop streaming his music and to quit supporting him. One of the biggest arguments against Scott was that he was aware that some of his fans were getting injured and in distress; footage of the night, showing Scott on a platform while EMTs attempted to help some of his fans that were in anguish, has been passed around via social media. Many argue that he was given a literal bird’s eye view of the crowd and still refused to stop the show or direct any attention to the important matters at hand.

Additionally, first-hand reports recount that the security and cameramen working the show refused to aid in terminating the show. A viral video of two fans climbing onto one of the cameraman’s platforms and begging him to stop the show as he continued to shoo them away. The medical teams and security that were hired for the event were not properly prepared for the disastrous night and all it entailed. Fortunately, one of the attendants was an ICU nurse; @madddeline___ on Instagram posted that she passed out and her friend “got people to apparently crowd surf [her] unconscious body to the security guard.” When she woke up, “[she] looked around and people were getting carried out with eyes rolled back into their heads by security, bleeding from their nose and mouth.” She was then asked by one of the security guards to help the medics with CPR. Some of the security and medics were even rumored to have quit upon realizing how detrimental the situation was.

Overall, nearly everyone involved has been blasted online for their poor judgment and disregard for the safety of the attendees, including Drake who was brought on stage as a surprise guest for the song “Sicko Mode.” While still extremely tragic, the events from this year’s Astroworld Festival have served as a cautionary tale for future concerts and musical events for artists, proving that no matter how many times an artist has performed and hosted shows, anything can happen. Hopefully, hereafter, venues and artists will better prioritize the safety and well-being of the fans when developing the festivals and concerts that are to come.

Let me first say that I do not believe the conspiracy theories that Scott had planned this as some sort of Satanic ritual or as a sacrifice of sorts. Honestly, I find those conspiracy videos and articles to be somewhat disrespectful to the victims of Astroworld because what happened to them was not a part of a religious ceremony, but it was an unfortunate result of terrible decision-making and a poorly developed music festival. I do, however, blame Scott for not stopping the show when he was well aware that some of the people in the crowd were passing out and uncomfortable. He claims that he was not cognizant of the severity of the event, but even still, I do not think that people should allow him to use that as an excuse. The death of someone should not be the base line for when one should step in to help in a ruinous situation. Whether it was just a singular fan that had passed out or about half a dozen, had Scott known that anybody at his show was not well, he should have done more to help. He was honestly the one in charge for the night, not the security guards and not the venue employees. He had the stage, he had the mic, he had the power.

I found Scott’s apology on his Instagram story to be pitiful and unsuitable for forgiveness. I am not saying that he was not remorseful, but he did not address what he should have, which was why he kept performing. In his video, he said, “You know my fans … really mean the world to me and I always just want to leave them with a positive experience and any time I can make out anything that’s going on, I stop the show and help them get the help they need,” but his words did not reflect his actions from the night prior.

For me personally, it was really hard to hear of the events from that night. I find it nearly unfathomable that the concert continued for as long as it did, especially with so many people screaming and pleading to stop the show. Moreover, I do not really believe that it was only eight people that had died on site. I know that some fans ended up passing away while in the hospital afterward, but I have read about so many people that ended up going into cardiac arrest and passing out due to the lack of air while in the crowd. If anything, I think that the media may be trying to minimize the panic involved with the news of Astroworld by not reporting all of the deaths. And although it may be disheartening to be reminded how deadly that night was, it does no justice to lie and hide the truth from the people. I really hope that everyone can take something away from that night, whether it be artists, venue employees, concertgoers, etc. No one’s life is worth sacrificing for the sake of a better view of an artist, and no life is worth sacrificing for the sake of money. I hope that all those affected by Astroworld one day get the reassurance and peace that they deserve.