Porta Potties: Getting the Scoop! 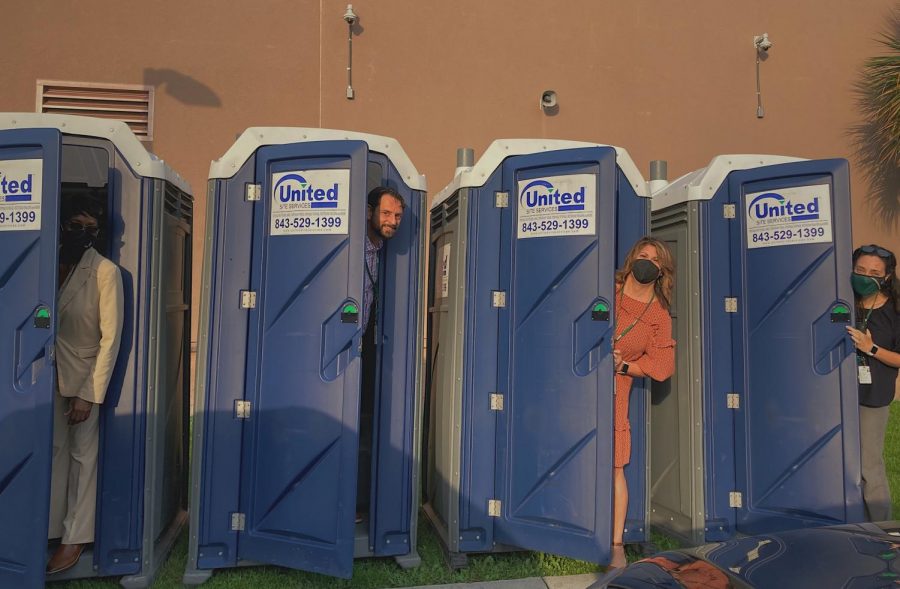 August 23, 2021 will probably go down as one of the most eventful, interesting days in Academic Magnet history. In fact, as of the time I am writing this, the legacy of the day still remains planted in front of buildings 7 and 8, gleaming in the sunlight and reminding us of the wonderful, yet finicky, plumbing system that resides below our school. Now I know you have questions, which is why I sat down with Mr. Perlmutter to get to the bottom of this whole mess!

Now I think the big question we all have is why. Why did all of this happen? Why did we even come to school for us to leave an hour and a half later? Why did the porta potties remain on campus for so long? Well lucky for you guys, I got all the answers!

Breaking Down the Plumbing System

In order to explain this whole ordeal, we must first break down the campus’s plumbing system. The reason that we often experience issues with the plumbing and sewer system is due to the fact that the Academic Magnet and SOA campus is not level. On our campus, there are what Mr. Perlmutter referred to as “high points” and “low points,” meaning that the pipes at the lowest points on the Magnet campus, such as

those in the girls’ locker room and cafeteria, are easily susceptible to getting backed up due to being at a slightly lower elevation than the rest of the plumbing. The crazy part is that the difference in height throughout the pipe system only varies by one or two inches, but those couple of inches make all the difference. 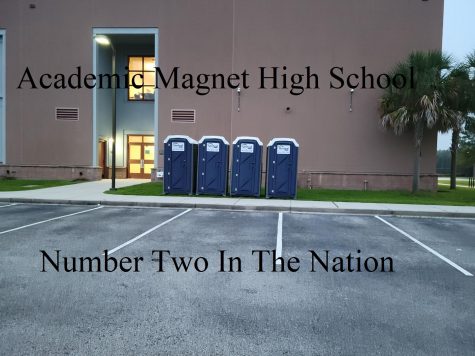 Now let’s go back to the Friday before that memorable Monday, August 20, 2021. As Mr. Perlmutter noted, around 1:00 PM, the oh-so-pleasant aroma of the sewer system was already wafting in the air, greeting those on campus with its glorious fragrance. In response to this famous warning signal, the City of North Charleston and the CCSD plumbing crew worked all weekend to try and clean it up, but unfortunately they could not defeat the beast that is the Academic Magnet plumbing system. It fought back, and it fought back hard.

Flashforward to that historic Monday morning. Both Magnet and SOA students came dragging in, still fatigued and low from the mood-buster that is the first day back to school after a weekend. And yet, little did they know, a saving grace was also in attendance for school that day. I remember as if it were only a week ago. I was in Newspaper, talking amongst my fellow classmates when Mrs. Hurt warned us to use the restroom while we could. As one would suspect, we were all very confused as to why we were being given a designated “potty break,” especially as very accomplished potty-trained seniors. Luckily for us, though, Mr. Hurt was not advising us to use the restroom because she doubted the strength of our bladders, but because the water was going to be shut off campus-wide at 9:00 AM sharp. How lovely! But do not fret, for the Magnet administration was prepared, already in cahoots with the City of North Charleston to supply the campus with portable toilets and sanitizing stations to hold us over until the backup was cleared.

The Underappreciated Heroes of our School Campus

Which brings us to our favorite (and now deeply missed) friends, the porta potties. Placed strategically at every main exit of the school, four porta potties (three normal-sized ones and one handicapped one) held their ground, ready for any student or staff member who was in need of a functional restroom. Sadly, they were not able to be appreciated as expected to be, for they were only given less than an hour to serve as our saviors in the midst of the plumbing fiasco. While I am not exactly sure if they were used that Monday between 9:00 AM and our early dismissal time of 10:00, I am grateful that the porta potties were so willing to sacrifice themselves for us in case of an emergency.

So why did we leave? Of course, had the CCSD plumbing crew and Magnet staff thought that we would not have been able to make it through the day using the make-shift restrooms, they would not have held in-person learning that day. Yet, they were hopeful, and they all genuinely thought that it could work for the roughly seven hours that we would be on site. But as we have learned this year, plans can change quickly and it was mainly due to our least favorite swindler: COVID-19. Mr. Perlmutter stated that he genuinely had faith that we could have made it through that Monday in school with the porta potties had it not been for the infamous virus. Due to the constant need for handwashing and extra sanitization, the need for sinks and water was greater than it usually is here at the school, thus obviously causing for an increase in the demand for running water. Therefore, the school district and the Magnet administration found it best to let us continue our learning online for the rest of the day, or in my case, a free day to hang out with friends.

As we all noticed, the water was turned back on in the school, but the porta potties still stayed. This was due to two main reasons. First, there was still a fear that the plumbing would turn on us again, leading to another backup. We are all aware now of how tricky it is to keep the sewer system running smoothly, and as a precaution, Mr. Perlmutter left the porta potties on campus in case of a repeat of Monday morning. It was not until a week later that he felt it was safe enough to remove the porta potties and declare the plumbing “fixed.” So now, we just had to wait until the City of North Charleston picked them up. During the time of my interview with Mr. Perlmutter on the morning of Tuesday, August 31, I was told that we did not have a clear timeframe for when the porta potties would be picked up, for Mr. Perlmutter was told that they would be collected “when [the City of North Charleston gets] to it on their pickup route.” So now we wait. Mercifully, it only took three days for them to get picked up and on the following Wednesday, we waved goodbye to our visitors!

Though not entirely welcomed in their first few days, the porta potties serve as a reminder of the diligent, forever efficient people that are working behind the scenes for us students. It is not easy to maintain a fully-operational school campus for 700+ students, especially when faced with unpredictable factors such as COVID-19 and the unreliable North Charleston plumbing system. So I think its best that we remain thankful for all those who work hard to keep us all comfortable and reassured, our administration and our marvelous porcelain toilets. Go thank a staff member (and a toilet) today!