Recent Evidence of Aliens Across the Globe 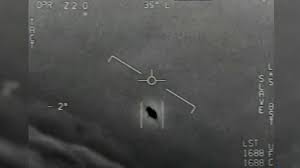 If you’ve watched the news lately, you’ve probably seen some headlines relating to the status of COVID-19 or the recent gas shortage in America but there’s something more interesting that you’ve probably missed and I’m here to fill you in. On Monday, former president Barrack Obama commented on the recent videos gaining traction that show unidentified flying objects in the sky. Obama responded to these videos by saying “What is true, and I’m actually being serious here, is that there is footage and records of objects in the skies that we don’t know exactly what they are”.

The newly leaked video from 2019 shows a spherical object floating around then splashing into the ocean. This video along with many others has been confirmed legit by the U.S. Navy who took the videos. After appearing on “The Late Late Show with James Corden” on CBS, former President Obama explained that the objects move in ways that are hard to understand. Aeronautics experts have even been baffled by the patterns and trajectory of which these objects move in the sky.

Along with Obama, another former federal official has recently discussed this phenomenon. Luis Elizondo, former director of the defense department’s Advanced Aerospace Threat Identification Program, explained to 60 Minutes that these sightings happen often and are hard to explain. Elizondo told the news program, “We’re going through our due diligence. Is it some sort of new type of cruise missile technology that China has developed? Is it some sort of high-altitude balloon that’s conducting reconnaissance? Ultimately when you have exhausted all those what-ifs and you’re still left with the fact that this is in our airspace and it’s real, that’s when it becomes compelling, and that’s when it becomes problematic”.

Former Navy pilot David Fravor also had something to say about these sightings. He explained in the same 60 Minutes segment that he had spotted an object that hovered across the water in 2004. Along with three other pilots, Fravor described it as a tic-tac-shaped object moving above the whitewater area.

The reason that these former officials are talking about it is that there is a government-sanctioned report on “unidentified aerial phenomena” expected to be sent to Congress in a few weeks.  Former National Intelligence Director John Ratcliffe explained this report to Fox News a couple of months ago by saying that it would include information that would not be easy to comprehend.

If you’re interested in the possibility of aliens I highly recommend you listen to Joe Rogan’s podcast with Bob Lazar. He goes into depth about what he witnessed while working at area 51 and has a very convincing story to tell.