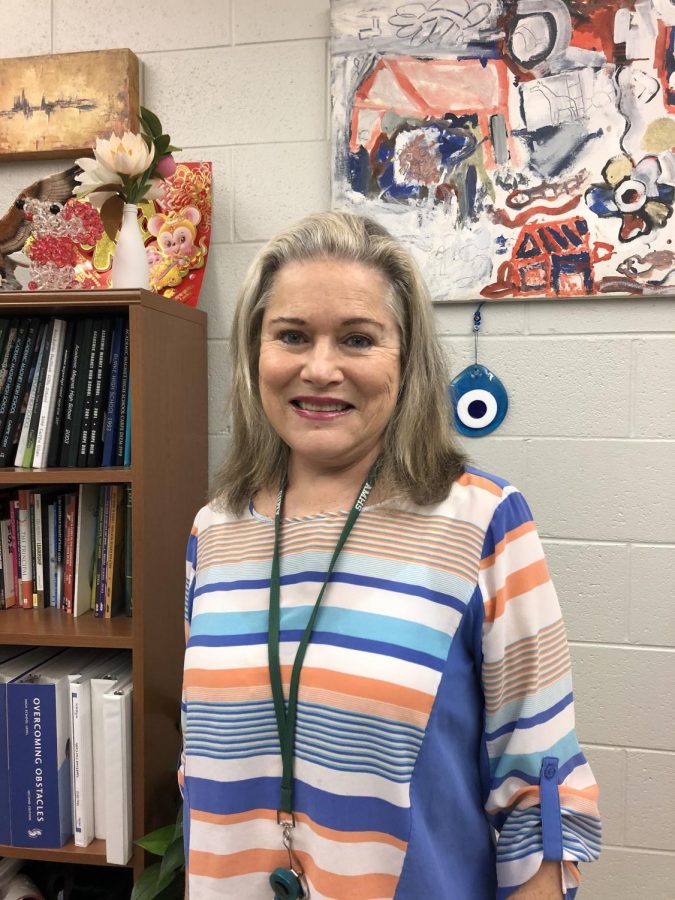 As you all probably know, our very own Principal Spencer will be leaving us next year. She has been at Magnet for all of my four years here, and I remember first meeting her at a freshman orientation sort of night with our families. Some of you seniors probably remember her telling us to take the plunge, to jump off the cliff, and face new things like she did in Mexico. I have always remembered that advice, and tried to live by it. Thank you, Ms. Spencer! We will all miss seeing you and saying hi in the hallways during the day. And although we will miss you here so much, good luck in Egypt! We are so happy for you and this new opportunity and adventure that you will have.

Here is an interview with Principal Spencer that Jojo Lonyo (12) did with National Honor Society. Enjoy!

What is your most fond memory and academic magnet over the past few years?

“There’s not one memory, but it’s a collection of memories of conversations. You know, having real conversations with real young adults that have ideas, and dreams and plans. That’s what I’m going to remember most. That’s what I’m going to miss the most. You know, I’ve walked into classrooms and gone ‘oh, my God, the level of these conversations is just great’ or you know, just talking to kids in the hallway. It’s rich. It’s a rich environment. I love it.”

What are you most looking forward to in your future endeavors?

“Opening a new school, quite literally from the ground up is not an adventure I’ve ever had before. I’ve been able to open new buildings, open new divisions, open new courses, but never the whole building where I get to hire the principals, the teachers, everybody! This is pre-K through 12. So it really, from the ground up, is going to be my baby and that is just something I couldn’t walk away from.”

“That’s amazing. So they didn’t give us many details. But is it… I’ve heard rumblings: is it in Egypt?”

“Yes. In Cairo, Egypt. I can give you all kinds of details. It’s a school that will be run by the largest corporation of private international schools in the Middle East, and they even have schools in other parts of the world (about 50 schools) that they manage. So it’s a corporation and they have asked me to come over and start up what they want to be their flagship school in Egypt. Their very best schools are in the Emirates… like Dubai. Dubai American Academy is well known as their flagship American curriculum school in the Emirates and they want me to replicate that in Cairo. So it’ll be a combination of the American curriculum and the International Baccalaureate.”

Do you have any advice for the next incoming class of Raptors that you hope they’ll benefit from even if you’re not here to tell it to them?

“Be brave. Our Raptor students have so much to offer to each other, to their school, to their community, but more than anything in the world, to their world. Reach out and make your impact. That, I think, is what sets Academic Magnet apart from any school that I’ve ever been in. From any school, really, I almost would say, worldwide. I know there are other great schools. But when I think back on what I know our students have been involved in, in terms of making a real difference (and I know that’s a bit of a trite phrase) but you know, really reaching out beyond themselves and solving a problem is one of their greatest assets. You know, thinking through ‘how can I attack this? What can I do or what can we do as a group to really make some change?’ And whether that’s in robotics, or whether that’s in the sciences, whether that’s in reaching out with your language skills, your reading abilities, your tutoring abilities: make your impact. Be brave and make your impact. Make a splash. Don’t tiptoe.”

What do you hope your lasting impact at Magnet will be?

“I am hopeful that I have had some influence and that the encouragement has been very overt to do exactly what I’ve just described, to reach out beyond these walls, you know, to not be afraid of other cultures, other countries, travel, experience, absorb, embrace. Embrace being uncomfortable, it’s okay! It’s okay to be uncomfortable with somebody else’s opinion. You know, we need to… learn, though we’re not always perfectly successful, to agree to disagree, and to respect the opinions of others. But the way you really do learn to do that is you become the other. You become the minority in a majority world. And it’s, I think, the only way to really learn to walk in other people’s shoes, and therefore to be the compassionate leaders that I know Raptors are meant to be.

Okay, so those are all of my prepared questions but just in general, is there anything else you think you want to add? Any closing remarks?

There are four words -and I used these with the yearbook; I think this is in my yearbook quote, and I’m sure it’ll be in the graduation speech too- but there are four words for what I think of Academic Magnet, and they’re… not what I’ve left behind here, but what I want to also take with me. What I have learned is to really believe in students’ passions, their promise, their possibility, and their purpose. That’s what I am taking with me out into the greater world. I have been in some wonderful schools; I think this is the best one I’ve ever been in. There’s no doubt about that. So I have learned a lot about what young people contribute to this world, and the fact that you are so much more tuned in to what works and what doesn’t work in this world than I ever was as a teenager or even the generations -probably two generations between you and me- have. You get it. You really get it. And that is my lesson learned: to value that every day.