Charleston… All the Stops from sunrise to Sunset

A Perfect Day In Charleston 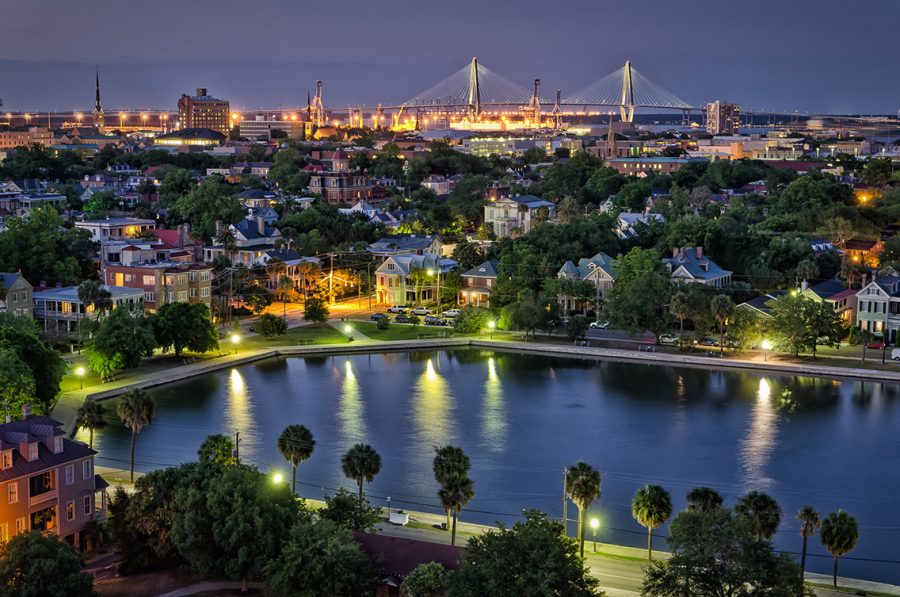 The first stop of the day is Metto Coffee & Tea to grab a coffee and maybe a freshly made pastry to tide you over till brunch. This is my personal favorite. It has the best coffee in Charleston hands down. To make it even better it has a gorgeous outdoor patio with the most friendly staff members.

Now that you have your coffee you are off to Sullivan Island beach to watch the sunrise and watch all the cute doggies run wild. While you’re over there if you or your crew need another caffeine fill up cruise into the Co-op for $1 drip coffee, they’ll hook you up.

Next, head over the bridge to downtown to take a breezy stroll on the Battery to work up a serious appetite and to take in the stunning views of the Charleston Harbor.

Now that the crew is hungry the brunch reservations are ready for y’all at Miller’s All Day. I suggest ordering the waffle with bananas, sorghum, caramel, and meringue. It is to die for. Also on top of the food being really good, the atmosphere is really cool too so it’s the place to hang out and relax.

Following brunch, it is now time to hit King Street. I suggest working your way down the street by shopping all of the name-brand retail shops like Urban Outfitters, Free People, Anthropologie, Yeti, etc. Then support the local vendors and shops along with the famous Historic Charleston City Market.

Since it is summer, it is hot. So I then would catch a ride back to King Street to snag some ice cream from world-famous Jeni’s Splendid Ice Creams. They have way too many good flavors for me to suggest just one, so this decision will have to be left up to you to decide.

Next up on the list is lunch. I have a few suggestions depending on what the group is feeling. If y’all are feeling light and refreshing I would definitely hit up Huriyali for an acai bowl or some other great vegan options. Or for a hardier meal and the best burger in town I recommend Little Jack’s Tavern. Their burger is the best burger I have ever eaten and I don’t even like burgers. Although a close second would have to be from Husk at the Bar. They do it right there too, it is right next to the restaurant Husk but it’s called Husk at the Bar. It is super small but a super cool place to grab an appetizer and a drink.

After lunch, if the crew is of age I would head over to Edmund’s Oast brewery and try out all the local beers they have on tap to get a head start on the evening. But, if not everyone is of age I think I would do some historical sightseeing and even visit the waterfront Pineapple. Or even recharge by laying in the pretty shaded grass near the Battery.

Then if you’re anything like me I will be hungry again so it is dinner at 5church, then immediately after dinner, it is drinks and a view at Eleve Rooftop Restaurant & Lounge. But honestly, for dinner, you could go any place that google tells you to go to. Everything is good. Well, maybe not 82Queen because my brother got food poisoning from there so it is on the banned list of places we will never go back to. Also maybe steer clear of Hank’s Seafood Restaurant to avoid looking too much like a tourist.

It also can not be a perfect day without getting dessert from my absolute favorite place. Carmella’s. It is a dessert bar that has some of the best treaties ever. Get the mini cannoli cake, you will thank me later. You can sit inside or out, but I suggest sitting outside because the temperature will be dropping and the people watching will be super entertaining.

Then catch a ride back to Coleman in time to see the sunset on the Pitt Street bridge. I’d park the car and get out and walk all the way to the end for the best view of the entire city. You can see Sullivan’s Island, the Ravenel, and even the historic district of downtown Charleston.

But the nights not over yet, ride on back up the street to any of the restaurants on Shem Creek: Saltwater Cowboy, Vickery’s, and Water’s Edge. I guess I take back my statement on going anywhere because I wouldn’t suggest Red’s Ice House or the underneath part of Vickery unless you’re ready to get a little rowdy.

Overall, this would be one of the best days in Charleston if you wanted to feel like a tourist in your own city.

Okay bye now, I need to be on my way downtown to snatch a cannoli cake for myself. I’m craving it and I won’t be able to think of anything else until I eat a slice.