Taylor Swift Was An English Teacher In Her Past Life 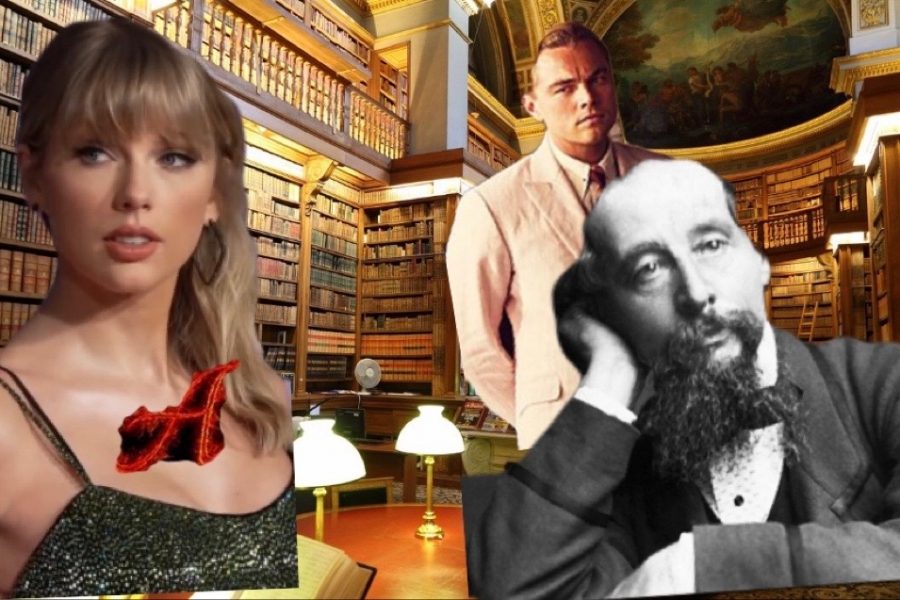 Taylor Swift is known for her catchy lyrics and hit songs, but she also often alludes to various literary texts in her songs. Common culprits to Swift’s lyricization are novels we read at AMHS like The Scarlet Letter, The Great Gatsby, and Slaughterhouse Five.

In her second studio album, Fearless, Swift wrote a hit song called “Love Story” which portrays the tale of forbidden love between two teens who finally get to be together in the end. This entire song is an allusion to Shakespeare’s Romeo and Juliet. This story revolves around two young lovers from opposing families who are torn apart by others. The two end up committing suicide once they cannot be together. In Swift’s song there is a happy ending to her version of this story as the two get to be together. “Romeo” even gets permission from Juliet’s dad and they live happily ever after. Throughout the song Swift refers to the two lovers as Romeo and Juliet (herself being Juliet) to portray this epic love story.

In “Love Story” Taylor also makes another literary reference to Nathaniel Hawthorne’s The Scarlet Letter. The lyric reads “cause you were Romeo, I was a scarlet letter, and my daddy said stay away from Juliet”. WOW! A 2 in 1. Swift must have been in Mrs. Grayson’s AP Lang class with these references. In this one, she refers to Hawthorne’s story regarding Hester Prynne, a young woman who was publicly shamed for committing adultery. She was forced to wear a large red “A” on her clothes to show everyone her her wrong-doing. In this lyric I suppose Swift was saying that because “Romeo” was in a relationship with her, he was publicly going against what his family wanted. Being with her was like wearing a large letter “A” and becoming a social outcast of sorts. Be on standby- more Scarlet Letter references to come.

In the opening lines of “Getaway Car” (one of her best songs tbh, and the bridge is omg) from reputation (no the r is not capitalized), Swift beings with “It was the best of times the worst of crimes” as a play on words from Charles Dickens’ book  A Tale of Two Cities. This line by Dickens is iconic because it shows that even in times of despair there are always times of hope, and even in times of hope there is always despair. The world is not black and white good and evil, it is a mix of both. I suspect Taylor began this song with a play on this famous line as her song is about committing a crime, escaping and finally being free. Although she was committing a crime, she finally felt liberating while doing it (hence, the “best of times”), but then asserted that although that was the case, there still was a crime happening.

In “This is Why We Can’t Have Nice Things” (another song from reputation), Taylor has a whole string of lines relating to The Great Gatsby by F. Scott. Fitzgerald. She has many references to this novel; I guess it just made an impact on Taylor. She begins the song with these lyrics “It was so nice throwing big parties,
Jump into the pool from the balcony,
Everyone swimming in a champagne sea,
And there are no rules when you show up here,
Bass beat rattling the chandelier,
Feeling so Gatsby for that whole year”

Jay Gatsby is known for his wild parties on West Egg where his guests would swim in his massive pool and drink champagne. I assume there is no greater meaning to this reference other than to portray to the listener the nature of these parties and help create a mental image for her fans (that and that she just likes the book in general).

In the catchy tune, “New Romantics” in her album 1989, Taylor Swift makes another reference to Nathaniel Hawthorne’s The Scarlet Letter and says “we show off our different scarlet letters, but trust me mine is better”. This line confuses me a bit to be honest. It doesn’t really go with the story of the song so I assume she may just like to talk about scarlet letters in her songs and that it rhymed.

Taylor went above and beyond with her literary references by naming a song “So it goes…” as a reference to Kurt Vonnegut’s Slaughterhouse Five. This was a phrase muttered by all of the characters once a death happened. It desensitized all of them to death and made it seem like something that should only be acknowledged for a mere second and no more. They say this because they believe death should not be a big deal as they are dead in the current moment but still alive in others in the past. Confusing, I know, but Swift may have used it to portray the death of something more figurative like the ending (death) of a relationship. It could have been a statement that although it is over now, it still existed in the first place and can continue to exist in memory even though you can not experience it in present day. I am not sure this is the idea that we should look at death with as it was written a bit ironically, but I think Swift was on to something by applying this mindset to other things.

In another reputation song, “Don’t Blame Me”, Taylor makes another The Great Gatsby reference but this time saying she used to be someone’s “poison ivy” but now she is their “daisy”. This could mean that just like Daisy to Gatsby, she is seen as perfect, yet unattainable, that she can do no wrong.

In her song “Right Where You Left Me” on her most recent album evermore, the entire song seems to be a literary allusion to Great Expectations by Charles Dickens. The speaker in the song seems to be a character similar to Miss Havisham from Dickens’ book. Miss Havisham was left at the alter on her wedding day and has not taken her wedding dress off since. She has also left everything in her house exactly the way it was on her wedding day. In “Right Where You Left Me”, Swift begins the song with this verse “Friends break up, friends get married
Strangers get born, strangers get buried
Trends change, rumors fly through new skies
But I’m right where you left me
Matches burn after the other
Pages turn and stick to each other
Wages earned and lessons learned
But I, I’m right where you left me”

She even includes the detail about a match, which in Great Expectations Miss Havisham had her dress catch fire and kills her. Then Swift says:

They say, “What a sad sight”
I, I swear you could hear a hair pin drop
Right when I felt the moment stop
Glass shattered on the white cloth
Everybody moved on
I, I stayed there
Dust collected on my pinned-up hair

This collection of lines can allude to the “sad night” being Miss Havisham’s wedding day, and while everyone moved on, she did not. The speaker said her hair remained unchanged with dust collecting, similar to Miss Havisham remaining exactly the way she was on her wedding day. Swift probably chose this literary allusion because she was moved by Miss Havisham’s tragic story and most likely related to it somewhat. Since she is known to be a romantic, she has probably experienced a situation where she had been left and cannot let it go.

These references are just scratching the surface of all the allusions in Taylor Swift’s discography, but I often wonder in her time of being the biggest pop star in the world, how does she have time to read the classics? She got famous around the age of 15/16, so therefore, she would have most likely read these books after her stardom. She does write all of her own songs, however, so she must just like to get inspiration from what she reads in her free time.fz2