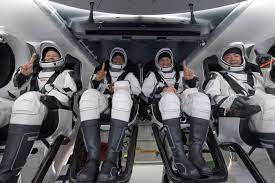 Four astronauts, Shannon Walker, Victor Glover, and Mike Hopkins of NASA, and Soichi Noguchi of the Japan Aerospace Exploration Agency, just landed in the ocean this past Sunday. The astronauts sped through the atmosphere at 3,500 degrees Fahrenheit protected by the spacecraft called Resilience. The four astronauts parachuted down into the Gulf of Mexico at around 3 a.m. This was the first time that NASA has done a landing at night since 1968. The team was supposed to return on Saturday from their 6-month trip to the space station. The landing had to be delayed until Sunday because of poor weather conditions. They ended up landing in calm waves and clear weather. 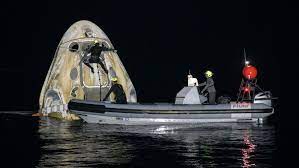 Upon their return to Earth, a mission controller quipped to the Crew-1 astronauts “On behalf of NASA and the SpaceX teams, we welcome you back to planet Earth. Thanks for flying SpaceX. For those of you enrolled in our frequent flyer program, you have earned 68 million miles on this voyage” NASA astronaut, Mike Hopkins responded, “We’ll take those miles. Are they transferable?”.  SpaceX has six contracted round trips to the International Space Station and back. This means that there are five more trips to complete. Crew-2 arrived at the space station last weekend and won’t return until 2021 this year.

In a statement from NASA, they explained that the crew members keep themselves busy inside the overcrowded space station with scientific experiments, lab maintenance and emergency gear training. There were 11 people crammed in the space station which is about the size of a football feild before Crew-1 left on Sunday. The station only contains seven propersleeping quarters. The astronauts even celebrated birthday on the ISS. One of the rookie astronauts, Glover had his 45th birthday on Friday. This was their last day on the space station and they celebrated with balloons, musical instruments, and a cake. Glover tweeted about the experience by saying, “”Gratitude, wonder, connection. I’m full of and motivated by these feelings on my birthday, as my first mission to space comes to an end. This orbiting laboratory is a true testament to what we can accomplish when we work together as a team. Crew-1 is ready for our ride home!” 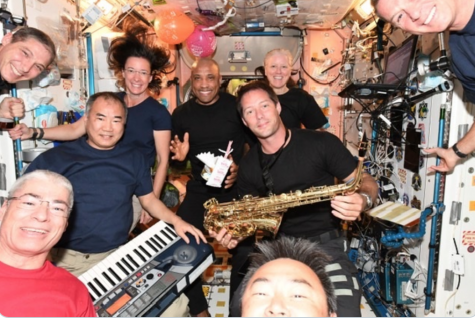 After the launch back to Earth, Steve Jurcyk, acting administrator for NASA explained, “This marks many important milestones, but it really is important for getting a regular cadence of crew to the station and back,”. He also added, “What we do on ISS is important not only for the research and technology development that we do for here on Earth but also to prepare for what we’re going to do in the future. Our ultimate goal is sending astronauts to Mars.”