What’s Going On with Seth Rogen?

He's been up to a lot lately it's quite cool 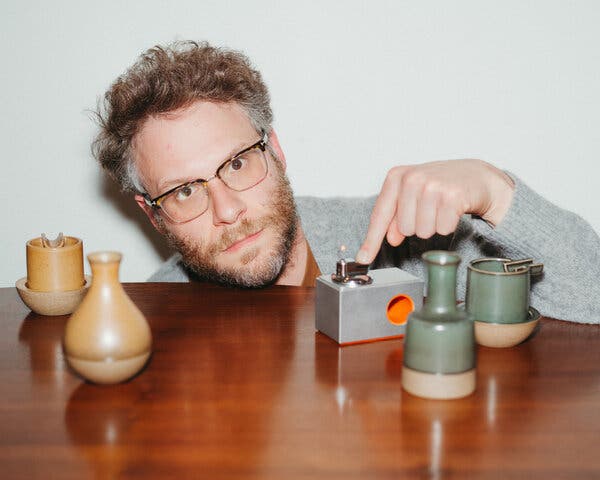 The infamous Seth Rogen is essentially everyone’s dream bestie for life. He’s been a constant source of greatness on and off screen, with a funky personality that I’d say almost everyone loves watching. Especially over the past year, it seems that Mr. Seth Rogen has been fully evolving into what most likely won’t be his final form, but what is looking to be a pretty awesome form nonetheless. Throughout the past few years, it has seemed like Rogen has truly been coming into himself and developing to really be his best self. With the latest edition of British GQ, released this past April of 2021, the world got to see a new and not improved per se, but I’d say a better and seemingly happier version of the Seth Rogen we all know and love. Despite the fact that for GQ’s magazine shoot Rogen was definitely styled by some of their designers and decked out in lots of Gucci, neither of those factors really take away from the new style and #swagger that he is exuding in this issue of GQ. You very much get a like “your favorite and cool hippie, camp-y, meditative, uncle that you can be besties with” type of moment from this issue, and it’s well worth noting. I’ll include some visuals down below so you can see for yourself and enjoy the purely positive vibrations that Rogen is throwing out into the Universe.

Throughout this time too, Rogen has ultimately shaken off the shackles of the stereotypes that Hollywood has pushed onto him for years, always wanting to capitalize off of the perception of him being the classic lame and significantly overweight white man, with nothing to offer. He found a way to personally remove himself from that view, in a way that might attempt to establish a new role for white men in society, no longer merely complacent, but attempting to better themselves as humans and in their approaches to the world. Rogen has even written and released a book during this time, called Yearbook, where he talks about so many different stories of his life and his own experiences, all the while still maintaining his comedic voice throughout the book. It’s out in most bookstores now, so if you particularly enjoy Seth Rogen or feel like reading something random, I would say go for it.

Recently, with the start of quarantine last year, the world has also gotten to see the start of Seth Rogen’s pottery career, with him featuring his newest creations every few days on his Instagram. To be fair though, it wouldn’t be wrong to assume that a lot of his artistic inspo comes from the #substances he takes, which would fall under psychedelics like molly, shrooms, and lots and lots of weed. In his latest interview with British GQ, he talked about just how much drugs have shaped his life for the better compared to alcohol, elaborating on his disdain for just how stigmatized drugs are compared to alcohol. With his drug use, he claims that he has found himself enjoying life more, as it has allowed him to find himself and opened his mind up to more creative pursuits, one of which being his pottery.

Professionally, Rogen and his longtime pal, Evan Goldberg, have recently started up a business together, known as Houseplant. Houseplant operates basically as a pot dispensary, selling both pot and pottery products that have been curated and are the creative lovechildren of Rogen and Goldberg. It operates both online and offline, with a few stores, albeit mainly dispensaries already selling some of Houseplant’s products. Sadly, those stores are located in California as we all know that South Carolina still has yet to legalize marijuana… Lame. Houseplant’s other pot products are available online, but of course, because it is a celebrity-made company and all products are one of a kind, they all go for quite the pretty penny. With only a few hand-crafted types of products available such as a record player, a Seth Rogen-patented ashtray, an oil lamp, and multiple different styles of lighter, there’s no doubting the Rogen-ness of the company.

Recreationally, Rogen has been dedicating so much of his time to his pottery craft, showing off his creations on Instagram. They’re actually all pretty amazing and his passion for pottery and creative self really come through.

Now let’s take a look at Seth Rogen’s pottery growth, from his first creations to his latest (I promise you won’t be disappointed):