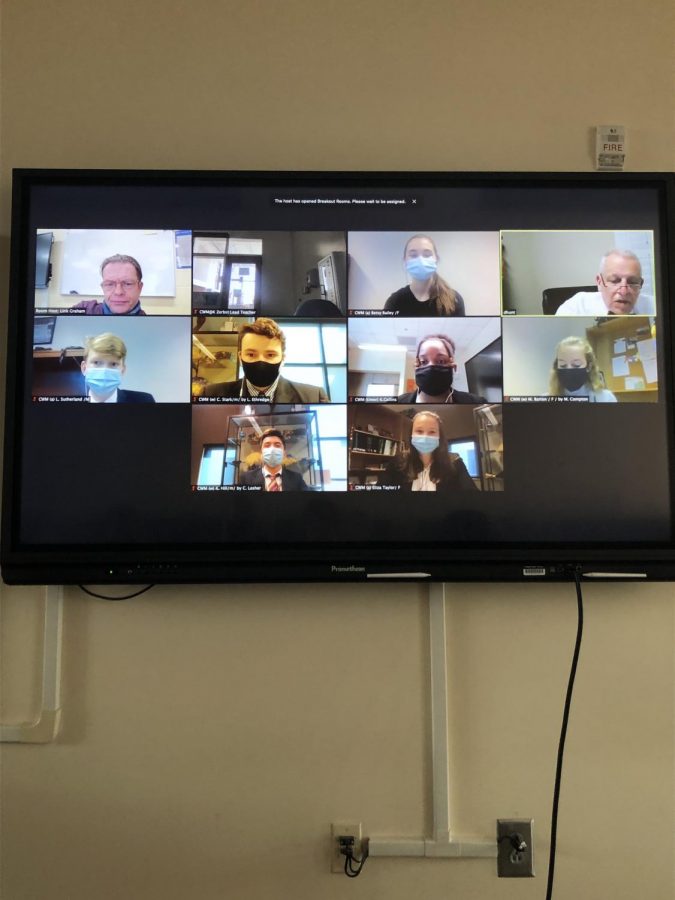 This past Saturday, AMHS’s first ever mock trial team competed in the SC Bar High School Regional Competition. This format was a bit different than in recent years: It was completely virtual. I, myself, am a mock trial veteran competing for years in middle school and even coaching a team too, and when I heard that the competition would be virtual, I couldn’t even fathom how it would happen. Part of the allure of mock trial is being able to work the court room, present in front of a real judge, and use your charm to persuade the jury that is sitting right in front of you. I worried that I would not be able to make a connection with the judges and use my charm 😉 to score points like I used to. Well, in some ways I was right. Let me start with a brief explanation of how the competitions even work. Each year, a case is written by the SC BAR and published for teams to view. They are either civil or criminal cases and always have an arguable plaintiff/prosecution and defense side. Each school assembles a plaintiff and defense team and fills the roles of three attorneys and three witnesses on each side. The witnesses have to portray a character in the case and memorize and affidavit and be prepared to answer any question about their character. The attorneys have to prepare questions and opening and closing statements for their side. The case this year was rather grim. It revolved around the death of a 12 year old child in a trampoline park as he was celebrating his big soccer game victory from earlier. Was the trampoline park to blame for this accident? Or was it the individual? The case is written so either side can be argued (but because I am an attorney on the defense it is NOT the trampoline park’s fault in my humble opinion) This year, the AMHS mock trial team consisted of:

Our regional competition took place in February, and we competed in the “Greenville Region” despite not being anywhere close to Greenville. Due to the virtual format, the regions got mixed up, and we competed against teams from all over South Carolina rather than just in the Charleston area. We had three rounds, one on Friday and two on Saturday where one of our plaintiff or defense teams competed against an opposing team from a different school. It is completely random which team from each school competes, and one side ends up going more than the other due to an odd number of rounds. For AMHS, it was their plaintiff side that went twice. The plaintiff for AMHS went up first Friday afternoon against what we believe to be Waccamaw High, and they did great. They objected, they convinced, and they worked their charm to (what we think) was a victory. At the end of each round, peers elect “most effectives” from the other team. The most effective witness from AMHS was Landon Ethredge and the most effective attorney was Eliza Taylor. The judges also choose their most effective, not from each team but from the entire round, but we found out about those later. The defense team watched and cheered from the viewing room which was a contrast from how mock trial usually is. Typically, it takes place in a court room where everyone is expected to be silent while watching. Since we could be in a different room, we could make any commentary we wanted, which was actually pretty entertaining. One anonymous member remarked,

The defense was up first Saturday morning, and after losing one of our major witnesses the same week, we were pretty nervous. It became clear after opening statements that our opponent (possibly Dutch Fork High?) was good, but nothing we couldn’t handle. It was a tough match, and we had no idea who ended up with more points. I, myself, was confident in my closing statement and hoped that all of our teamwork would be enough to win despite our challenges with people not showing. It was also kind of distracting when all of the girls on my team had a crush on one of the opposing attorneys. The peer most effective recipients were Evan Daniels and Jordan Burrell.

We had a few hours of a break so we walked around the school, played some rounds of Kahoot, and made some TikToks until we got our next round assignment. Plaintiff was up again. The defense team was slightly relieved. It’s a lot less stressful to watch the round from another room than to have the weight of your team on your shoulders. We did some digging to find out which school we were competing against in the last round. oh no. Strom Thurmond High School. They always win state. We even heard rumors from our attorney coach that they have a court room in their school solely to practice mock trial. We thought we must be in the winners bracket. They are well known in the mock trial world. They have the name and the cred that AMHS does not have yet, but we still put everything we had into the last match. We were so good too. I honestly thought we deserved to win, but we were in for a rude awakening when awards came.

That night, at the awards ceremony, Mary Compton and Eliza Taylor won judges awards for the highest scoring witness and attorney in the first round. Whitney Knotts (me lol) and a witness from Dutch Fork won highest scoring witness and attorney from round 2. And when they began announcing awards from round 3, we realized the sad reality of how that round had gone. Both recipients of judges awards were from Strom Thurmond High. When they announced the results of the winners of the region it confirmed our fears. We had lost the last round, basically making it almost impossible for us to have enough points to be chosen to compete at state. If we had gone against any other team in the final round, we would have won and gotten to go to state, but the matchup put us against not only one of the best teams in the state, but also the nation. The other two teams that got to advance from our region got easier match ups for their final round, so it was easier for them to score enough points to go to state. We performed excellently, but because of our matchup, our season had to end there.

I am still so proud of my team and everything we accomplished despite it being just our first year together. I hope that AMHS mock trial will continue for years to come. Lastly, I would like to give a special shout out to our teacher coach Ms. Zerbst. She had this to say about the team: “It has been a privilege to work with Mock Trial this year. I have genuinely appreciated the opportunity to learn from some of the best in the state about how to think and argue about a case! Special kuddos to our fearless leaders Eliza Taylor and Whitney Knotts without whom this competition would not have been possible. It was particularly heart-warming to see such a diverse group of students working together on the competition. We were represented by Seniors, Juniors, and a large contingent of Freshmen making our sustainability as a club viable for the future. Although we didn’t make it to the state competition, I feel certain that the lessons learned from this first attempt will propel us to even greater heights next year!”