Why One Direction is the Greatest Boy Band of All Time

Yeah, even better than those guys and Justin Timberlake I know, this is a highly debatable subject. However, I am here to explain why I’m right and every other opinion is wrong. Harry Styles, Niall Horan, Liam Payne, Louis Tomlinson, and Zayn Malik were the best boy group of all time.

Many love to poke fun at the band, calling them somewhat of an “industry production”. Although this may be true…due to a certain Simon Cowell…that point is invalid; and here’s why.

I’ve already explained the background of One Direction in my “Which One Direction Article Are You?” quiz/article (go take it if you haven’t already), but I’m going to discuss it further for those who are unaware of the origins of the 5 men I’ve spent 10 (11 in August) years of time investment; so sit back, relax, and grab a snack. Get ready for the long haul. So in 2010, One Direction was created, some would even say “formulated”, by the aforementioned Simon Cowell after they were each eliminated in the “Bootcamp” stage of one of the most popular and widely known singing competitions, The X Factor. Each boy entered as solo contestants,  but Simon envisioned a much larger future. Harry came up with their band name, and they continued throughout the competition together until they were eliminated and took home third place. However, their “history” (haha get it) did not stop there; One Direction had accumulated a large following throughout their time on screen. Whether it be raw talent or their staircase diary chats, their fanbase had (and still, to this day, have) a connection to their personalities and dynamic as a band. They were the best of friends, and they made some of the most popular songs of all time. One Direction’s sales of their first album, Up All Night,  no matter the country or region, especially in the U.S, was highly celebrated when it was released in 2012. They went on a tour in the UK known as the “Up All Night Tour” and saw extreme success in their home area (except Niall, our Irish king). They released their second studio album, Take Me Home, the same year and their sales reached 4.4 million copies each worldwide at the end of 2012. Their raging success in the states continued and even granted them their first world tour in 2013 known as the “Take Me Home Tour” where they performed 134 shows and sold 1,635,000 tickets. You can’t tell me that isn’t impressive for a band who consisted of 16, 17, and 18 year olds, especially one that was only 3 years old. While touring, the boys filmed a music video for a cover of “One Way Or Another (Teenage Kicks)” for Comic Relief, a British charity, and travelled to Ghana to help volunteer at a children’s hospital and schools in the area. With such a busy agenda, you may be wondering how their music abilities are coming along at this time; “Are they even writing music? Recording? Anything? Is this all PR?”. And to answer that, I say HAHAHAHHAHAHA. One Direction didn’t even write their music until their third album…so basically, they worked on one of their best, self made albums while they were on tour…ain’t that something. 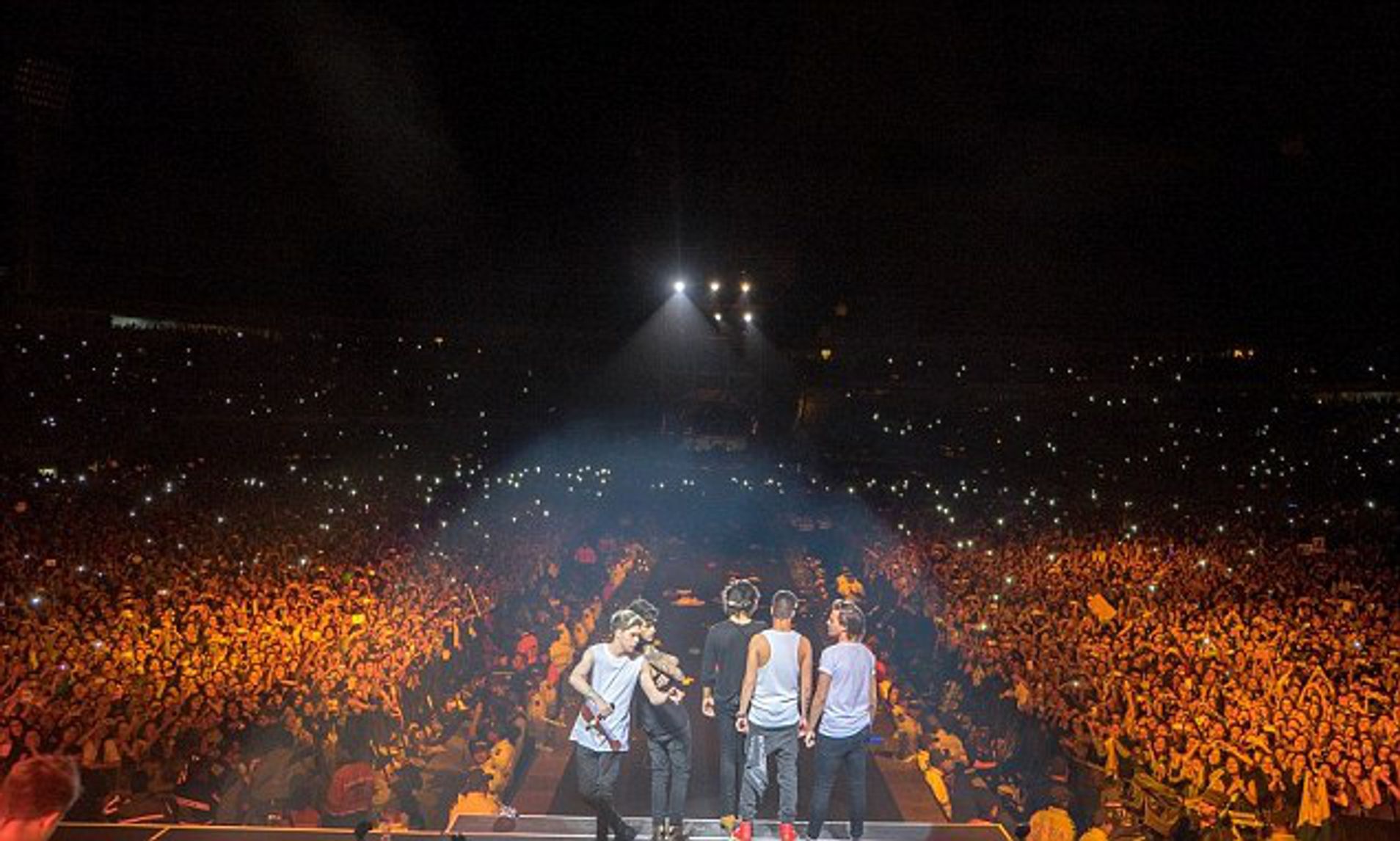 Midnight Memories is One Direction’s third studio album. It was released on November 25, 2013; the same year their second album dropped. However, this album was way more well received by fans than their first two, with it having a different tone and a sound completely of their own, not to mention selling another 4 million copies worldwide. They also made a movie called This is Us (that I still own to this very day) that was released in December of the same year and sold nearly 300,000 copies in the UK alone. In their third year together, One Direction was, according to Wikipedia, the first boy band in history to gross 1 billion dollars. You can’t tell me they got those sales from looks alone; with a connection to their audience that grew as their tour presence grew, One Direction soared above all other boy bands. Yes, this means bands like NSYNC and the Backstreet Boys were significantly less popular than the 5 boys who were the age of most college sophomores who had, at this time, had only been together for 3 years. The boys went on yet another tour called the “Where We Are Tour” that celebrated their music and success up until that point. Playing nearly 70 shows, the tour became the highest-grossing concert tour in 2014, and almost 3.5 million fans showed attendance. At the end of 2014, 1D released their fourth album named FOUR.  Not so creative, but maybe it shows a hint of foreshadowing…anyways…FOUR is arguably their best album. With their sound being completely their own, the lyricism of all members was highlighted; especially that of Louis and Liam. FOUR debuted at number 1 in 18 countries and sold 3 million copies worldwide. With all four of their albums reaching prime success, One Direction was also at their prime success point. When 2015 rolled around, One Direction was on a “roll” themselves. They went on yet another world tour known as the “On the Road Again Tour” and was the second highest-grossing tour of 2015. It may seem at this point that the 1D reign may never end, but alas, we all know that all good things must come to an end. 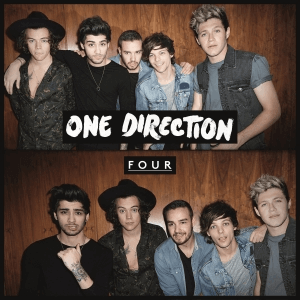 Disclaimer: Zayn if you’re reading this, I’m not serious. I would die for you. Kisses forever. Congrats on the baby!

On March 25, 2015, Zayn Malik released a public announcement that he would be leaving the band for good. This was heartbreaking to many; even 12 year old me was distraught. One Direction would never be the same..how could they ever replace him? Quick answer, they didn’t! One Direction continued PR appearances on popular late night shows and interviews on their own. Although Zayn’s departure was a turning point in One Direction’s existence, it didn’t seem like it phased them. Their final album, Made in the A.M was released in late 2015. The album brought tons of attention and sales their way despite Malik’s departure. After its release, One Direction announced their 2016 hiatus. At this time, there was still tons of hope for the band! “Drag Me Down” topped The Beatles’ record for the most top ten Hot 100 debuts among bands and Made in the A.M gave 1D the “Artist of the Year” award at the American Music Awards for the second consecutive time. They gave a live performance together on The X Factor and finalized their last performance on TV with Dick Clark’s New Year’s Rockin’ Eve. Louis later revealed that the hiatus would last 18 months. But, alas, it has been MUCH longer than 18 months and the four remaining boys had not renewed their contracts with Republic. They received their final award in 2017, although each member had released their own solo projects. Liam accepted the award on the band’s behalf and fans around the world had the sick feeling that there was no hiatus; they would never return as a whole ever again. Although not necessarily being Zayn’s fault, many fans (including myself) are still irritated because the timing of their separation made it seem like Zayn’s leaving made the band dynamic change, which ultimately left the boys in a rut. If Zayn had never left, would One Direction still exist today? There’s some food for thought for you all.

Overall, One Direction experienced extreme success in the short time they were together. They barely knew each other and continued on to be one of the most decorated and celebrated bands of all time despite their  reputation. Each member of 1D has experienced extreme success despite their separation; how many broken up boy bands can you say THAT about? Harry is even up for 3 Grammys…whatchya know about it, huh?Anyways, if you still don’t believe me, I have one last thing to say: Quit hating on teenage girls and their interests; just because teenage girls like something, that doesn’t make it bad. If anything, One Direction’s success shows us that teenage girls run society and you should give us more credit. We rock. The End.