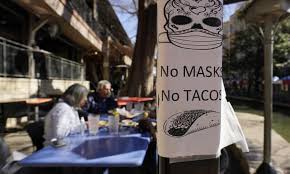 In the last week,  5 stateshave lifted the mask mandate: Texas, Mississippi, Iowa, Montana, and North Dakota. These states join Alaska, Arizona, Florida, Georgia, Idaho, Missouri, Nebraska, Oklahoma, South Carolina, South Dakota, and Tennessee (the states that never required face coverings statewide) as those who do not require a mask. I have a lot of opinions on this matter. As I insult the intelligence of these states for lacking a mask mandate, keep in mind that I will not hold back regardless of political party. Any state that believes it is the right time to lift the mask mandate will be under fire.

Texas: I am going to outright say it. Lifting the mask mandate and reopening businesses 100% in the state of Texas is extremely unwise. Texas is one of the states that is associated with poor COVID-19 guideline discipline. Although their governor stated that the reasoning for this is the decline in new COVID cases, that is not a good reason. In a state as heavily populated as Texas, lifting the mask mandate is asking for another surge in cases. In Texas alone there has been a total of over 2 million COVID-19 cases and over 46,000 deaths. And as for the businesses, while many would assume that re-opening 100% would be better for most businesses, it is actually hurting, especially smaller businesses. Most owners want to continue to create a safe environment for both them and their customers. Keep in mind that stores are allowed to enforce a mask unless you have a medical condition. This has created conflicts between stubborn customers who refuse to wear masks and businesses that require it. Gov. Greg Abbott of Texas defended his decision by stating,

As much as I would like to agree with Gov. Abbott, it has been proven time and time again that the people of the state of Texas are known to not follow COVID-19 guidelines in the first place. Just over the weekend of March 13-15, over 2,000 new cases arose in Texas, disrupting their overall consistent decline.

Mississippi: I think it is clear that Mississippi is not in the right place to fully open businesses and lift restrictions. I don’t think a state that contains Ole Miss should be lifting a mask mandate. If you looked at any social media account of any student at Ole Miss, you would know that Ole Miss students don’t seem to care about COVID. Gov. Tate Reeves of Mississippi stated, “We have to get our economy rolling so that individuals can get back to work. And I think that’s critically important.” I understand that the economy is important. However, I personally think that maintaining the safety of your citizens is also critically significant, but who am I to judge what has priority. He continues defending this decision with stating, “And oh, by the way, unlike President Biden, who wants to insult Americans and insult Missippians, I actually trust Mississippians to make the decisions. They’ve proven throughout the last year that they can do so.” This statement is so laughable to me. No one in this country right now is ready to have restrictions relieved. We live in the United States, a country where so many civilians lack the discipline to follow COVID-19 guidelines. Lifting these restrictions is just asking for another spike of COVID-19.

Iowa: All Iowa has is corn and wheat so maybe I can be more lenient. Nah I’m just joking. But seriously now is not the time to re-open everything. What I will say though is that Gov. Kim Reynolds of Iowa has been more vocal about her plans for her state while lifting certain restrictions. According to the Des Moines Register, Gov. Reynolds is “now working to vaccinate their most vulnerable populations, including more than 500,000 seniors, plus school staffers, child care workers, police and firefighters.” She is also attempting to centralize and streamline appointments so that these vaccines can be handed out quicker. Regardless of these arrangements, I still feel it would have been smarter to fulfill these plans first before opening everything and lifting restrictions. In fact, the state of Iowa has been having a difficult time getting vaccines to the state another states such as California, Texas, and New York have been prioritized. Besides, didn’t Iowa just recover from a high spike of cases and deaths from November and December?

Montana: There is not much to say about Montana. The state on Montana has not made the headlines regarding COVID-19 unlike Florida, South Carolina, Texas, and California. This may be due to the fact that this state is not as populated, making the number of deaths lower. Gov. Gianforte also stated that he would prioritize the liability protections of businesses and healthcare workers before lifting the mask mandate, which is slightly more comforting than what is in place in Texas and Mississippi. However, according to US News, “some public health officials are saying the state still hasn’t vaccinated enough vulnerable people to safely lift the mask mandate.” With the state having less than 47,000 people vaccinated, I have to agree.

North Dakota: I will say, it is strange seeing North Dakota in the news. The biggest event that has happened to them is electing a dead representative. North Dakota lifted their mask mandate on January 18, 2021 due to the continuous drop in corona virus cases. While many medical professionals have criticized this decision, Doug Burgum stated that “personal responsibility” will allow their state to remain safe. While he encourages for people to wear a mask and believes that science behind it, he says their is no need for a mandate as the people know what to do. Oh Doug, I wish it could be that way. I wish everyone would be responsible and wear a mask not because of a mandate, but because of common sense. Unfortunately, that is wishful thinking. There needs to be a mandate. We all know that when there is not a mandate, people will not do the right thing. Take Florida for example.

It is so important to wear your mask. And when I say wear your mask, I mean wear it correctly. If it doesn’t cover your nose, it is not correct. With cases slowly treading downward, it is so important to be careful to not have another spike. The United States as a whole has had over 29.5 million cases of coronavirus and over 500,000 deaths. It is not the time to get comfortable and careless. There have been modifications in terms of the guidelines confirmed by medical professionals once a person is vaccinated. Only those fully vaccinated can meet each other indoors without social distancing or masks. Fully vaccinated individuals can also meet with low risk individuals. For example, if your grandparents are fully vaccinated, they can meet you if you are low risk. They can also skip testing and quarantining when exposed, but only if they do not show symptoms. However, everyone should avoid non-essential traveling or congregating in large groups in public.