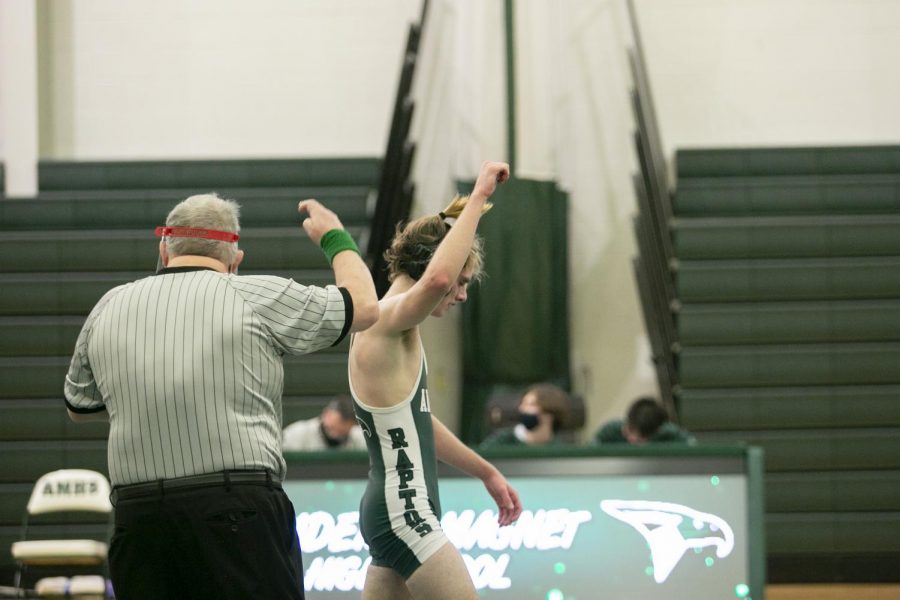 A special thanks for photos by https://saltwashedphotography.smugmug.com/Sports/AMHS-Wrestling-21/

This year’s Academic Magnet wrestling team is definitely one of the more underrated teams at Magnet and definitely deserves to be looked at more. This year’s roster has many people who had a great shot at doing well at the state championship. The roster for this year is as follows: Sean Healy, Alex Hernandez, Josh Moore, Bowen Enright, Hunter Suttcliffe, Chase Dillon, Blake Boyd, Gabe Medlin, Randy Reed, and Gannon Rose. We’ve seen many Magnet wrestling teams do well in the past, and this year did not break that pattern. Let’s talk about the key players on this year’s team who really have what it takes to compete at state. For starters, the lower state qualifiers this year were Sean Healy, Josh Moore, Chase Dillon, Bowen Enright and Hunter Suttcliffe. From that point, those who went on to Regionals were Sean Healy and Josh Moore. Both of these guys ended up winning Regionals and then progressed on to qualify and are yet to compete at state which will happen near the end of February. Despite the fact that this year’s season is over at this point for many of the guys on the team, one big thing that I think everyone can be happy and proud about is the fact that they really did put in the work at practice. All sports teams this year were very skeptical about how the season would shape out with concerns of Covid-19 at the forefront. In Sean Healy’s words,

“” Most teams this year at Magnet were not too impacted with problems Covid-19 related. The major point here is that these guys put in the work in the off season and it has paid off so far this season. Clear MVP candidates this year were Sean Healy, Bowen Enright  and Josh Moore so hats off to them for their great job all the way up to the lower state championships on Saturday February 27. Another questionable aspect to this season was how the team would shape up considering the loss of Jonathon Lemmon, Devonte Alston, and the other graduates that the team lost before this season. I would have to say that with the talent that the team has picked up with the new freshmen this year, magnet wrestling is here to stay and have a bright few years ahead of them.

Update: Josh Moore and Sean Healy will advance to the 3A State Championships on March 6th.