Ultimate Ranking of Every One Direction Song

Do you really have good taste in music? 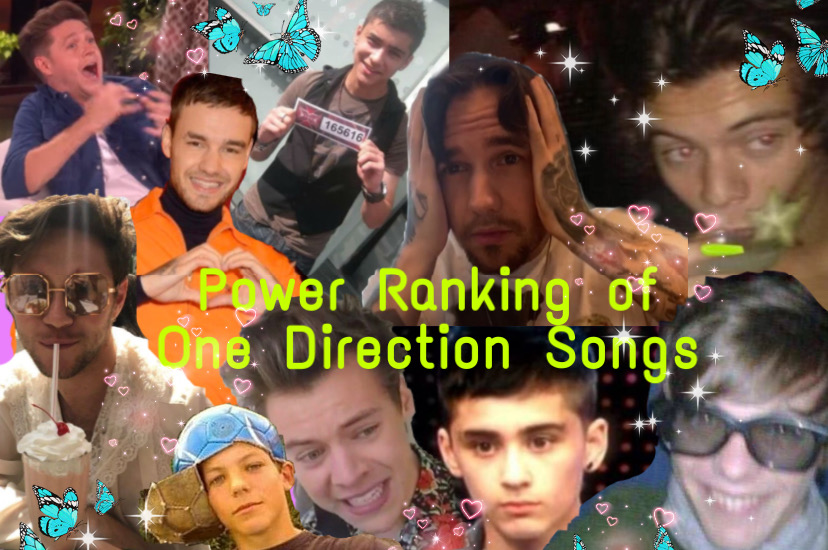 We can all agree that One Direction rocked the Earth beneath us when the band debuted in 2010 as prepubescent teenagers who charmed everyone with their looks and strong vocals. Without any hesitation, I will admit that I too was swooned by those five cuties. I spent a good 7 years in love with One Direction and spent more time learning facts about them and their lyrics than I did learning at school. Back in the day, I knew everything there was to know and accumulated far too much knowledge about this band than a 12-year-old should.  I’m convinced that the wisdom I gained through my experience as a One Direction fan was the foundation for opening my third eye. There is no other way to explain it, but I have a deep-rooted attachment to One Direction and the era that they created in my life and I don’t think I will ever forget that. Talk about iconic! Anyway, being a One Direction superfan requires knowledge of every song lyric, beat drop, and dance performed by the band, and I can assure you that even after years of not listening to their music, I still remember all the details about their music  (is this even a flex?).

I spent a good couple of hours in my room having a solo dance party to One Direction’s discography to cumulate the ultimate ranking of their songs. As I do with other music, I created a mental criteria for what makes a good song and chose to focus on lyrics, danceability, vocals, and swagger. With that taken into account, here’s my ultimate ranking of every One Direction song ever, any other opinions are wrong <3

Because it’s simply too much to include my innermost thoughts about all 92 songs, I elaborated on my top 5 songs to provide a little more insight as to why my brain enjoys those specific One Direction songs the most.

This song comes from my personal favorite album, FOUR, and is easily the most well-crafted and heartwarming piece by the band. I long for the young love described in this song, it’s so pure and tender :'((  (Harry and Zayn transcend in this one)

Every time this comes on shuffle I audibly gasp—the funky guitar and synchronized clapping? Literally amazing. This song never fails to put me in a lively mood.

Okay, imagine a boyband covering a Fleetwood Mac song because this one has all the witchy elements of a Fleetwood song. It’s pretty obvious Mr. Harry Styles influenced the production of this one considering he’s a huge fan of Stevie Nicks and Fleetwood Mac. I cannot blame him for that, they really are that good. Anyway, this song always slaps and I pray that it is played at my funeral.

I have always wondered why this song is so good and I have yet to understand. Despite the concept being a little out-of-pocket, I will look past that for the reason that this song is so incredibly good. It has smooth vocals and a crazy beat to dance to, so what else could you need?

Oddly enough this song gives me Ed Sheeran vibes, and it terrifies me that I have it ranked so high with that consideration. It’s a bit slow and honestly sad, but it is so well crafted I simply could not look past the raw talent in this song. It suits their voices well and literally tears at my heart every time I listen to it. The best part of this entire song is when Harry (kinda) spits bars in the second verse (go white boy go!). The vibes are very similar to Moments from the band’s first album, Up All Night, they love to pull at our heartstrings I guess.

I still remember when this song graced the Earth upon the release of the band’s last album, Made in the A.M. The nuance that this song was able to emulate amazes me to this day, it goes absolutely crazy and switches up on you at least 3 times. There’s even a bit in the bridge of the song that is reminiscent of Charlie and the Chocolate Factory, specifically the scene in which they enter the candy room—it’s dazzling.

18
Happily
What a Feeling
Stockholm Syndrome
Over Again
Olivia
Strong
Long Way Down
Moments
Temporary Fix
Clouds
Wolves
Little White Lies
No Control
Where Do Broken Hearts Go
Alive
Fireproof
Girl Almighty
Little Black Dress
I Would
Just Can’t Let Her Go (unreleased)
Ready to Run
Right Now
A.M.
Walking in the Wind
Once in a Lifetime
Spaces
Change My Mind
Home
Through the Dark
If I Could Fly
Fool’s Gold
Story of My Life
Why Don’t We Go There
Midnight Memories
Diana
C’mon, C’mon
One Way or Another (Teenage Kicks)
Illusion
Does He Know?
Rock Me
Still the One
One Thing
Kiss You
Drag Me Down
Tell Me a Lie
I Want
She’s Not Afraid
More Than This
Perfect
History
End of the Day
Something Great
They Don’t Know About Us
Night Changes
Irresistible
Don’t Forget Where You Belong
Act My Age
Half a Heart
I Want to Write You a Song
Infinity
Better Than Words
Never Enough
Love You Goodbye
Best Song Ever
Live While We’re Young
Little Things
You & I
I Wish
Stand Up
Truly Madly Deeply
Same Mistakes
Back For You
Heart Attack
Up All Night
What Makes You Beautiful
Hey Angel
Another World
Save You Tonight
Last First Kiss
Steal My Girl
Taken
Nobody Compares
Magic
Stole My Heart
Gotta Be You
Change Your Ticket
Na Na Na
Loved You First
Summer Love
Everything About You
I Should Have Kissed You

Through my listening process, I realized that all their better songs belonged to later albums such as FOUR and Midnight Memories, an alleged “prime time” as I would say. The pure vibes created in the albums is unmatched and proves the immense talent of the One Direction boys. Even though I love them dearly, their early music pains me and makes it really obvious they were teenage boys (soz, just facts). Regardless, One Direction is a timeless band that I can see myself listening to even in my thirties. I’ll check in with y’all then and we can see if I still know all the words, until then, it is farewell. XOXO