A guide for beginners and Blinks alike 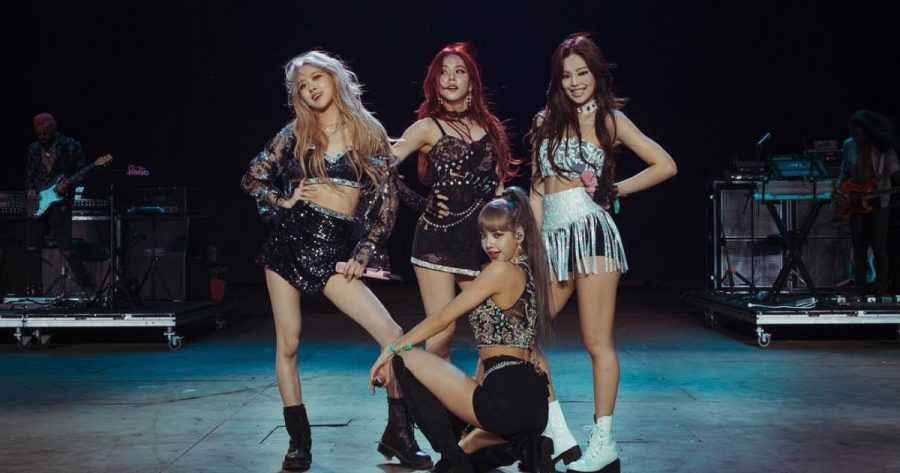 Blackpink at Coachella. From left to right: Rosé, Jisoo, Lisa, and Jennie

As the end of the year approaches, there is a great injustice that needs to be addressed: The Talon has not yet payed tribute the amazing Blackpink. The planet’s largest girl group, Blackpink is on the path to world domination. Members consist of rappers Jennie and Lisa and vocalists Jisoo and Rosé. This week, I teamed up with fellow senior Jason Guo to bring you an in-depth analysis of the group’s biggest hits.

NOTE: For the maximum experience, make sure to turn the subtitles on before watching the music videos.

“DDU-DU DDU-DU” is, without a doubt, Blackpink’s best track to date. The song sucked both Jason and I into the Blackpink fandom and is the perfect introduction to the group.

The girls’ number one hit is essentially a show of power. The main message: don’t mess with me. The pop song is interspersed with rap breaks, with members making it clear that they don’t take BS. “All your bucket lists, I bought it all/I take whatever I want,” and “I do what I please because I’m a bad girl.” The song then builds up with a more vocal-focused bridge. “If you want, go ahead and test me/You’re too predictable,” the girls taunt. Finally, the song explodes into action, with a confident, “Oh wait till I do, when I/Hit you with that ddu-du ddu-du du.” The infectious vibes are guaranteed to make listeners feel on top of the world.

The next Blackpink song is an epic comeback single. Released this summer, “How You Like That” is a song about rising from the dead. “I crumbled before your eyes/Crashed to the bottom and sank even deeper,” the song begins. The power comes from the bridges, where Rosé and Jisoo crescendo into the high notes: “Laugh all you want while you still can/Because it’s about to be your turn.” Lisa’s punk voice then finishes out the chorus, solidifying the mood. “Look at you now look at me, uh/Look at you know look at me,” she chants. Just when you think you get these girls down, they boomerang right back.

“Kill This Love” is a heavy-hitting breakup song about ending a toxic relationship. In it, the girls are geared up and ready for war. Though it might be hard, the singers are ready to end their relationships, no matter what their opponents might say. “You plus me sadly can be dangerous,” Lisa explains to the listener. In the end, the breakup turns out for the best. The girls resolve to do what’s best for themselves, even if it hurts in the moment.

Number 4: As If It’s Your Last

“As If It’s Your Last” is EDM-infused pop that screams girl crush. The song gives off definite schoolgirl vibes. The lyrics overflow with late night parties, boys, and dancing the night away. The concept is lighthearted one filled with enthusiasm, romance, adventure, and the desperation that comes with first love. The matching uniforms in the music video really sell the effect.

Number 5: Don’t Know What To Do

This next song is a unique crossover between pop, ballad, and EDM. The track truly explores more painful emotions, with the lyrics describing the end of a relationship in which the speaker involved herself so deeply, that her identity is lost without her other half. Lines like, “Say I am fine but/Don’t know what to do without you,” and “On a pretty day like this/How is everything so difficult” are completely relatable. The song is not so much as an expression cry of angst as it is a self-examination.

One of Blackpink’s first songs, “Whistle” is featured on the group’s release, Square One. The song taps into the girls’ more youthful side, portraying them as young and flirtatious. The girls are beautiful, and they know it. Like the popular girls at school, they play the field and have their pick of the boys. The song somehow manages to sound both fierce and sugary at the same time. The perfect mix.

Blackpink’s latest title track, “Lovesick girls,” is a sheer masterpiece. The song represents the heartbreak of love in a gut-wrenching, cry-your-eyes-out, beautiful kind of way. The girls’ vocals shine through the softer backtrack, making them the centerpiece of the work. Though there is some rapping from Jennie and Lisa, it is not as hard hitting as in other title tracks. The styling and sound is also slightly retro; the guitar and chant-like chorus sounds straight out of the 2000s. Think early Little Mix vibes but in Korean.

Boombayah was Blackpink’s first song, and the group debuted with a bang. A full blown party hit, the track is infused with pop and R&B. The song is structured to show off each member’s unique vocals while presenting the girls as a group. The result is alternation between verses, but singing together in the chorus. The song is fierce, self-loving, and unapologetic. A total dance bop.

“Playing With Fire” is a venture into dangerous, uncontrollable love. Though it carries Blackpink’s traditional EDM/R&B influenced pop sound, the song is unique in its own way. The track describes an all-consuming love that runs deeper than the surface. After attempting to wrestle free, the girls eventually relent to being consumed by the other, holding on to love until the end of time.

“See U Later” is one of Blackpink’s most upbeat breakup songs. Unlike “Kill This Love, “See U Later” is about dumping your boyfriend with pride. After all, who needs that loser anyway? At least, that’s what Blackpink thinks about this cheating jerk. “There’s no regrets” when it comes to this breakup, even when the boy comes back crying. The song is happy, confident, and pure pop.

Like what you hear? Stream Blackpink on Apple Music, Spotify, or wherever you listen to music. The group has plenty of other tracks, from their debut release Square One to this year’s more R&B release, simply titled The Album. You can even watch parts of Blackpink’s 2019 Coachella performance on YouTube! Whether or not you’ve heard of them before or not, we hope you’ll consider becoming a fulltime Blink (Blackpink fan).