Top 10 shows for the musical theatre novices of Magnet! 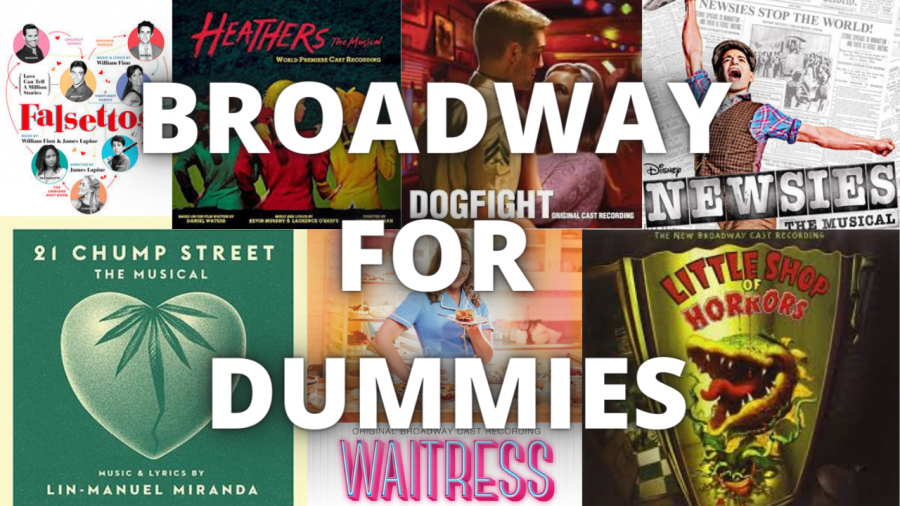 Hey squad! If you didn’t know, musical theatre is my guilty pleasure and if I could be anywhere right now it would be opening night, in the front row of a Broadway theatre. Although I could talk for years about Broadway shows, songs, actors and scandalous theories… I realize that most people are novice to the world of musicals. Today, I am going to be breaking down some of the best shows to watch/listen to for musical theatre virgins. (and including some of my favorites as well!). I will also be copying an article from last year and be including my favorite songs! *FYI this is NOT a list of MY top 10… that will come later*

Spotify playlist of all songs mentioned below if you’d like to indulge: https://open.spotify.com/playlist/6eJjJvYyX0nAx4UuSLdtfc?si=pLn88gSYTf6_YBXVmw-HLw

No, it’s not Hamilton as I assume most of you suspected. I rank Wicked at the #1 most palatable musical for those who aren’t super educated in musical theatre. I could easily suggest Aladdin, Frozen, The Lion King or any other well-known Disney adaptation, but I think that is far too surface level. Wicked has a remarkable set and memorable music alongside dynamic and interesting characters. The story follows Elphaba in her journey of growth, friendship, love, self-discovery and how she became the Wicked Witch of the West alongside her companion Ga-linda (iykyk) the Good Witch.

Best Song(s): “No Good Deed” (specifically when sung by Hannah Coreneau) OR “The Wizard and I” OR “For Good”

This is not your typical Broadway musical. In fact, it’s not even half of one. In 2014, playwright/composer/actor/lyricist Lin Manuel Miranda collaborated with This American Life and created a 14 minute musical based on the second half of a radio program entitled “What I did for Love”. That’s right… 14 MINUTES! The story follows Justin Laboy (played by Anthony Ramos <3), a straight-A highschool student who fell in love with Naomi Rodriguez (Lindsay Mendez), an undercover cop who was sent into Justin’s high school to pose as a senior and find out who’s buying and selling drugs. In an effort to make the school a safer place, Naomi coaxes Justin into buying her the devil’s lettuce and he’s forced to face the consequences. Somehow, Lin Manuel Miranda manages to fit a roller coaster of emotions and amazing songs into under 15 minutes. If you don’t want to dedicate 2 hours of your life to a Broadway show, just look up 21 Chump Street on Youtube and indulge!

Best Song: “What the Heck I Gotta Do” OR “Epilogue”

This beautiful musical is an adaptation from the movie Waitress (2007) with music written by the beloved pop-singer Sara Barellies. I will admit, Waitress is one of my favorites. The plot follows the life of a waitress named Jenna as she faces an unplanned pregnancy with her abusive husband Earl and an unexpected love story with her obstetrician, all while baking miraculous pies. The music is immensely beautiful and will 100% get stuck in your head. This musical is a must watch… or at the very least please listen to the soundtrack.

If you know who Jeremy Jordan is, then you know Newsies. Based off of the film from 1992, this beloved tale follows Jack Kelly as he and his fellow newsies unionize and strike against corrupt publisher Joseph Pulitzer following a newspaper price increase. Meanwhile, female reporter Katherine Plumbers covers the story in an attempt to break into the sexist industry, all while falling in love with Jack. While the score is fantastic, what really sets this musical apart is the choreography. The male dominated cast graces the stage with complex and acrobatic performances that will peak the interest of any viewer.

The cult classic film Beetlejuice starring Winona Ryder and Michael Keaton follows angsty teen Lydia Deetz as she moves into an old house haunted by a perfectly suburban couple, Barbara and Adam Maitland. As she copes with the death of her mother, she encounters weirdo-ghost, Betelgeuse, in hopes of locating her mom in the afterlife. The film to stage adaptation features insane magic tricks, effects and set pieces, in addition to the fantastic lyricism. As a personal fan of Sophia Anne Caruso and her unique singing voice, I think she perfectly encapsulates the angst and sadness of Lydia in a cohesive character. Unfortunately, Beetlejuice closed on Broadway but the cast album is 100% worth the listen!

This show is absolutely one of my top favorites. Little Shop of Horrors tells the story of Seymour, a grown, orphaned man who works as an assistant in a flower shop. Seymour is in love with his less-than-classy coworker, Audrey, who is in a relationship with an abusive dentist. Following a total eclipse, Seymour discovers a venus flytrap-esqe plant and begins taking care of it… which eventually leads to feeding it drops of blood. The blood graduates to humans and eventually Seymour is faced with killing people to feed his talking plant, Audrey II. Audrey II brings him fame, recognition, love and an unfortunate decline in morality. The perfectly time humour and loveable characters created by Howard Ashman create the perfect black comedy.

Best Song(s): “Grow for Me” OR “Suddenly Seymour”

While most people know the classic dark comedy, Heathers, many aren’t aware of the fantastic musical adaptation. Although Heathers never made it to Broadway, the original cast features Barrett Wilbert Weed <3, Ryan McCartan and Jessica Keenan Wynn. As misfit Veronica falls in love with the cynical (but HOT) JD, she is driven to accidental murder and impressive suicide-note forgery with the goal of social revenge against Heather, Heather and Heather.

While Mean Girls is not one of my favorite screen to stage adaptations, it is definitely an easy watch for those who are novice to the world of theatre. In 2004, Tina Fey created a comedic masterpiece of high school stereotypes featuring queen bee, Regina George, and homeschooled Cady Heron. Cady’s first friends, Janis and Damien lead an infiltration into the world of “The Plastics”. In what started as a silly prank, Cady becomes a back-stabbing, boyfriend-stealing mean girl. While the music and lyrics are a bit basic, Tina Fey, Nell Benjamin and Jeff Richmond created a catchy and funny musical for teenagers across america.

Dogfight is not as well known as the shows listed above, but it is definitely worth the listen (especially because of Derek Klena). Dogfight premiered off-broadway in 2012 and follows U.S. Marine, Eddie Birdlace, fresh out of training and ready to be deployed. He and his friends decide to host a “dogfight” on their last night in the US, where they bet on who can bring the ugliest date to a party. Eddie goes to a diner and meets shy waitress, Rose, who he flirts with and eventually invites to be his date to the cruel event. Rose finds out, but the two eventually reconnect and go on a real date. I won’t spill too many spoilers, but the music is guaranteed to be good as it was produced by Benj Pasek and Justin Paul (who also worked on Dear Evan Hansen). The story is sweet and features a well-known cast consisting of Lindsay Mendez (Wicked, Carousel), Annaleigh Ashford (Kinky Boots) and, as I said before, Derek Klena (loml).

Ok… this is a secret inclusion and isn’t really for those who aren’t familiar with musical theatre but it MUST be included. I can’t really go into the details of the show, as it is not 100% school friendly, but you can watch a pro-shot on Amazon Prime. If you want to be able to talk theatre, you need to know Falsettos. The show is split into two parts, “March of the Falsettos” and “Falsetto Land”, which follows the love stories of Whizzer and Marvin, Mendel and Trina, and Cordelia and Dr. Charlotte; with Jason, the son of Marvin and Trina, adding much needed commentary. I absolutely LOVE this show and especially Andrew Rannels and Christian Borle.

Once on this Island

Best Song(s): “Waiting for Life” OR “Mama Will Provide”

Ok homies! That is my completed list of musicals for those who aren’t theatre nerds. I hope you enjoyed it, and remember to be on the lookout for a list of my favorite musicals!