I Met the Next President of the United States 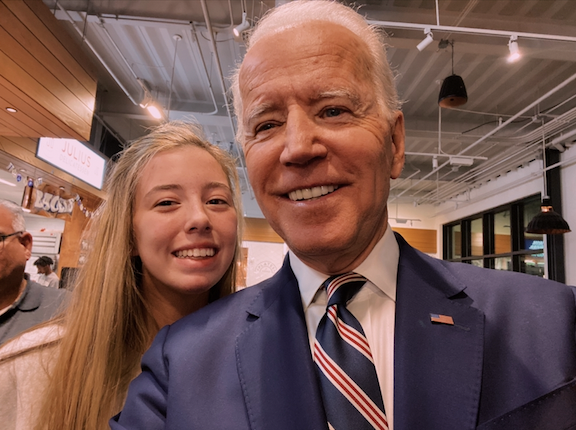 It was a normal day in February 2020 (more specifically, the day after semi), and I was tired from the night before and slouching around the house probably watching Dance Moms or something of the sort. Little did I know that in a few short hours I would be engaged in conversation with the next President of the United States. My dad was going to be a political analyst on MSNBC’s national nightly news program “Kasie DC” which was being filmed at The Workshop, and he invited me to come along (for those of you who don’t know, The Workshop is a gourmet food court type thing). At first, I was reluctant, but what ensued later made me grateful for the rest of my life that I ended up tagging along. I got some steak tacos with chips and queso from one of the food stations, and let me tell you, it was good. I then watched my dad explain the upcoming SC Democratic primary (notoriously the first presidential primary to take place in the South which helps create momentum to secure the democratic nomination for the general election for whichever candidate wins), and I was even in the background of their filming. All my friends were watching from home and were texting me from home and asking me to do various things in the background on live T.V. News flash: I didn’t do them.

After my dad finished speaking, we heard that Vice President Joe Biden would be coming on for an interview right after my dad. Then we saw him walk in. The second he came through the door, he had such a magnetic presence about him that I can’t quite explain. He had a smile from ear to ear and walked around the room greeting everyone before it was his time to be on T.V. He even went up to my dad and said, “I hope you said nice things about me *chuckle*”. At this point in Biden’s campaign, it wasn’t going well. He wasn’t able to make enough connections with voters and gain enough support to beat tough challengers like Bernie Sanders. People thought there wasn’t enough exciting about him, despite the fact that many believed he was the only one who could defeat Trump. Everything changed for him after getting an endorsement from Rep. Clyburn and winning the SC Primary. They called it the “Joementum”of his campaign. It felt kind of cool that my own state had such a major role in electing the next president (even though SC is a very red state). 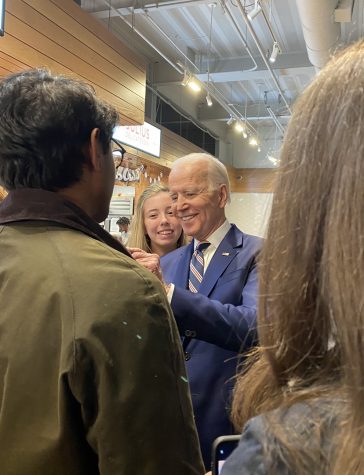 After his time on TV, Biden went around the room and had individual conversations with everyone there. I remember when he came up to me I was so nervous because I felt like I was in the presence of some sort of superstar. Being a diabetic, I talked about healthcare with him. He assured me that not only does he want to make healthcare more accessible for everyone, but he also wants to fund research for a cure. This really meant a lot to me. All I see is politicians going around saying they want to expand healthcare, but it is also important to fix the root of the problem and help cure diseases like diabetes. He is the only candidate that even mentioned helping fund research for a cure. I would love to live in a world without diabetes, and Biden seemed to really understand and care about my struggles. He also explained to me that he wants to fund research for curing Alzheimer’s disease and Cancer. Biden got emotional while telling me that helping find a cure for Cancer is also really important to him after his son, Beau, died from Glioblastoma in 2016.  He said he doesn’t want any other family to feel the pain of losing someone to Cancer. This is when my favor started to turn towards Joe Biden to win the 2020 election. All of his struggles (his problems getting over his stutter, his wife and daughter dying in a car wreck, and his son dying from cancer) will help make him a compassionate leader which is something I experienced in meeting him first hand. I have met a lot of candidates, presidents, and politicians, and I can confidently say none of them have been quite like Joe Biden. We took a selfie together, and he asked me where I want to go to college. At this point in time, I wasn’t so sure so I just said Georgetown (unknowingly that his son went there). He laughed and said, “well, I’ve written A LOT of checks there.”

I felt really happy to see him give his victory speech on Saturday and finally clench the presidency. Beau, shortly before he died, asked his dad to run for president one more time, and Biden explained that he wakes up everyday and wants Beau to be proud of him. I know Beau certainly would have been very proud after the news of his father’s victory Saturday. After his speech, they even played Beau’s favorite song, “Sky Full of Stars” by Coldplay, and I think it is to note that Beau passed away at age 46, and Biden will be the 46th president of the United States. I know Biden will take this compassion with him to the White House and unite our country once again. It’s pretty wild that I almost missed out on the opportunity to eat a taco on the background of national television and meet the president because I was “too tired.” Silly girl.