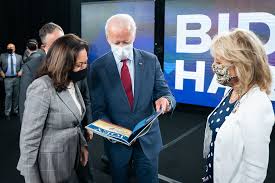 Next Tuesday is Election Day. And in less than a month, we will finally know the results of the 2020 Presidential Election. Some will celebrate, and some will protest. Our YouTube ads will finally return to normal.

But, this year, the election decides a lot more than merely who stands at the front of our country. In this election, deciding who to vote for is not a matter of which candidate is good; it is about which candidate is better. It is a matter of choosing to either preserve American democracy, or let it crumble at the hands of a mentally unstable tyrant and the brainwashed cult that trails behind him.

From the time that Donald Trump entered into the political field, he has amassed a following of people who seem to idolize him as a god. Never in recent American politics has there been a politician whose platform takes over the entire personality and belief system of his supporters. Never before has there been a president who has this amount of merchandise featuring his face and slogan. If you still don’t believe me, go to Google and type in “Trump House Pennsylvania.”

The cult-like nature of Trump’s following becomes even more disturbing when we see the policies that he has centered in his platform and the beliefs he presents to the world. It is sad to see that only one term after the first black president held office, we have now elected a man who publicly told white supremacists to “stand back and stand by.” A man who refuses in speech and in policy to support black lives, instead hurrying to paint the protesters fighting for freedom as “thugs”; who willingly downplayed the danger of a global pandemic, taking the lives of thousands of the Americans he is obligated to protect. A President who ignores reality and blindly screams “Make America Great Again!” while refusing to admit to the damage he has caused our country. Who cries “left-wing hoax” at any obstacle in his path, and publicly warns that he does not intend to execute a peaceful transfer of power should he lose.

If you are reading this, I urge you to turn off the propaganda and the political ads. Turn off Fox News, put down your hats and merchandise, and look around. Look at the thousands of people who have died because of a president that refused to take action in a global crisis. Instead of writing them off as “thugs,” sit down and listen to the demands of the black community, and the long-overdue respect that they fight for every day. Listen to the voices of the LGBTQ+ community, terrified at the prospect of losing their fundamental rights to an overwhelmingly Republican Supreme Court.

Is this the “great” America that you were promised?

Tuesday is the last day you can vote. And while you may take that right for granted, I would like to remind you of those under 18— including myself— who would give anything to be in your shoes. Whether you are a Democrat or a Republican no longer matters. Educate yourself, and vote for the future of America.

And, if we want there to be a future for democratic America, vote for Joe Biden and Kamala Harris.