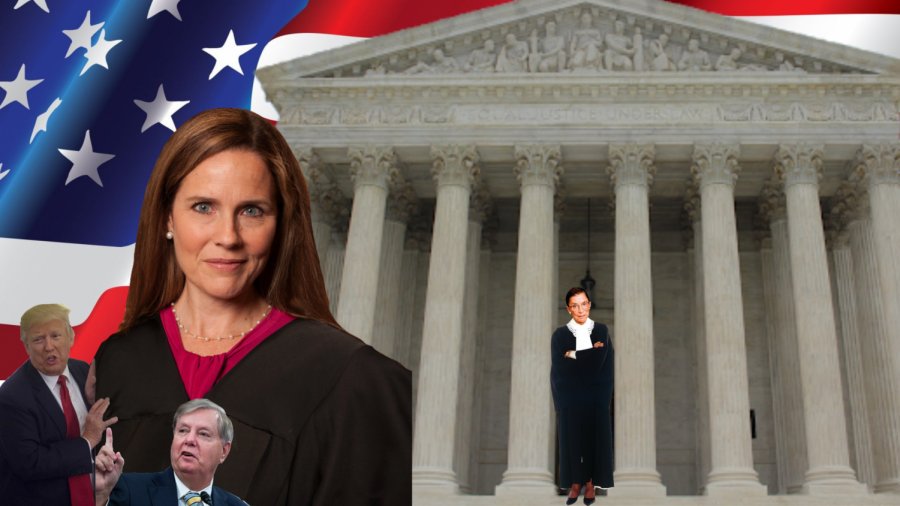 Welcome to Let’s Get Political issue No. 2! Today’s topic: Supreme Court nominee Amy Coney Barrett. Since the unfortunate passing of Justice Ruth Bader Ginsburg, the Trump administration is attempting to appoint her replacement prior to the November 3rd election. What does this mean for the future of the Supreme Court? Well, prior to the RBG’s death, the court was divided as such: four of the judges voted liberally, four conservatively, with Chief Justice John Roberts leaning slightly conservative but remaining relatively centralized. The late Ginsburg nearly always voted liberally, was a primary advocate for the feminist movement, and granted many rights for women in her time as a justice. Now her spot is up for grabs and President Trump is attempting to lean the court conservatively with Judge Amy Barrett before the upcoming presidential election. Why should we care?

Devout Catholic, Amy Barrett, was nominated for the Seventh Circuit by President Trump in May of 2017. Although questioned about her religious beliefs in connection with her rulings, Barrett stated “My personal church affiliation or my religious belief would not bear on the discharge of my duties as a judge.”, later that year Barrett was voted into the Seventh Circuit Court of Appeals in a vote of 55-43. Flash forward three years and Trump is nominating Mrs. Barrett to replace the celebrated Ruth Bader Ginsburg on the United States Supreme Court. Amy Barrett, with conservative values, would be quite the contrast to the liberal, feminist activist RBG. A primary concern of pro-choice American citizens is Barrett’s predicted stance on overturning Roe v Wade (1973) and the defunding of Planned Parenthood. On many occasions, Trump has stated his stance on abortion, for example, in 2018 the president tweeted, “For the first time since Roe v. Wade, America has a Pro-Life President, a Pro-Life Vice President, a Pro-Life House of Representatives and 25 Pro-Life Republican State Capitals!”. Many believe a significant outcome of the Trump/Barrett platform and a conservative SCOTUS is the possible criminalization of abortions and a social revert to the 1960s.

However, overturning Roe v Wade and defunding planned parenthood do not even brush the surface of issues taken with the Amy Barrett appointment. So, why is there such debate over Trump’s nomination? The answer lies in the timeline. Ginsburg passed away on September 18th, 2020, a mere 46 days away from the presidential election. Many disagree with Trump appointing a new judge to the Supreme Court so close to his possible reelection. Prior to RBG’s death, she stated, “My most fervent wish is that I will not be replaced until a new president is installed.”

This is not the first time a similar situation has occurred. In fact, in February of 2016, the last year of Obama’s presidency, he attempted to nominate Merrick Garland to the Supreme Court following the sudden death of Judge Antonin Scalia but was denied because the Republican-dominated senate ruled not to hold a vote on a nomination in the president’s last year in office even though the election was over 293 days away. Garland’s nomination eventually expired and President Trump appointed Neil Gorsuch the following year.

So I ask you, is the nomination of Barrett a clever play of the GOP in swaying the Supreme Court conservatively or a hypocritical ploy in order to reverse the strides made by Ruth Bader Ginsberg. Up for you to decide! See you next time on Let’s Get Political!