Top Quotes from the Presidential “Debate” 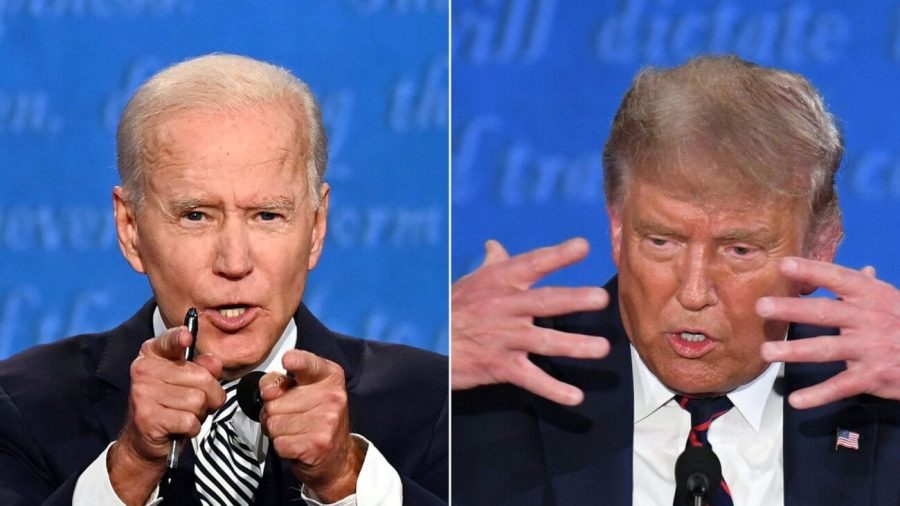 Believe it or not, the televised chicken fight broadcasted live on September 29th at 8:30 P.M. was a presidential debate. That’s right, the purpose of the hour and a half was to help the American people decide which candidate they wanted to be the leader of the free world. Debates are usually, emphasis on the usually, meant to give candidates a chance to present their policies on multiple relevant topics. This usually being the case I was planning on summarizing Biden and Trump’s points on these subjects in case you missed it. However, if you did see the debate you know that bickering unmatched by parents in the middle of a divorce took the place of discussion about policy and the future of our nation. Therefore, I decided to write about what you really missed which was the incessant 90 minutes of insults and pleading for a ceasefire from moderator Chris Wallace.

“I wear a mask when needed… I don’t wear masks like him. Every time you see him, he’s got a mask. He could be speaking 200 feet away and he shows up with the biggest mask I’ve ever seen.”

Trump commented on Biden’s overuse of wearing a protective mask during a pandemic. As we know now President Trump announced that he was infected with the coronavirus the Friday morning after the debate (Oct. 2). I’ve linked the definition of karma here and I’ll leave it at that.

“I’m getting it so cheap, it’s like water, if you want to know the truth.”

Trump remarked compared the price he was getting insulin to the price of water. According to a report done by the American Diabetes Association, the average American with diabetes spends about $9,601 annually on medical expenditures related to diabetes. Furthermore, someone with diabetes spends about 2.3 times more on medical expenditures than a person without diabetes. So maybe, just maybe, insulin is not as cheap as water.

Bonus: “Take a look at all of the drugs that what we’re doing.”

Trump said this right after the previous quote and I just think it’s funny because if you read it fast enough it looks like it says “take a look at all the drugs we’re doing”. Out of context of course but I had to throw it in here.

“He’s Putin’s puppy. He still refuses to even say anything to Putin about the bounty on the heads of American soldiers.”

“You didn’t think we should’ve closed our country [to China] because you thought it was terrible. … We’ve done a great job. But I tell you, Joe, you could never have done the job we’ve done. You don’t have it in your blood.”

Arguably one of the best one line zingers in the debate.

“It is what it is because you are who you are. That’s why it is. The president has no plan.”

Biden blamed the coronavirus death toll on Trump. I like this quote because I find it very poetic and almost Dr. Suess-like. It gives me the same energy as “Today you are you! That is truer than true! There is no one alive who is you-er than you!” from Suess’s Happy Birthday to You!

“Will you shut up, man? This is so unpresidential. … Keep yapping, man.”

A very straightforward retort by Biden. Some slight juxtaposition here because referring to Trump as “man” is not exactly the most formal response but we’ll let it slide since Trump came after Biden’s blood, family, and education.

Moderator Chris Wallace finally snapped back with this quick jab after Trump said Biden needed to follow the rules of the debate as well. Wallace still made himself a doormat to be trampled over by both candidates for the rest of the debate but at least he tried.

“I believe that we have to do everything we can to have immaculate air, immaculate water, and do whatever else we can that’s good.”

Trump on climate change and the environment. Interesting word choice. Not necessarily aligned with previous comments about climate change. At least Trump admitted that he believed climate change was caused by human factors “to some extent”. He’s practically the Lorax now.

“Folks, do you have any idea what this clown is doing?”

A crowd favorite. Just in time for Halloween too.