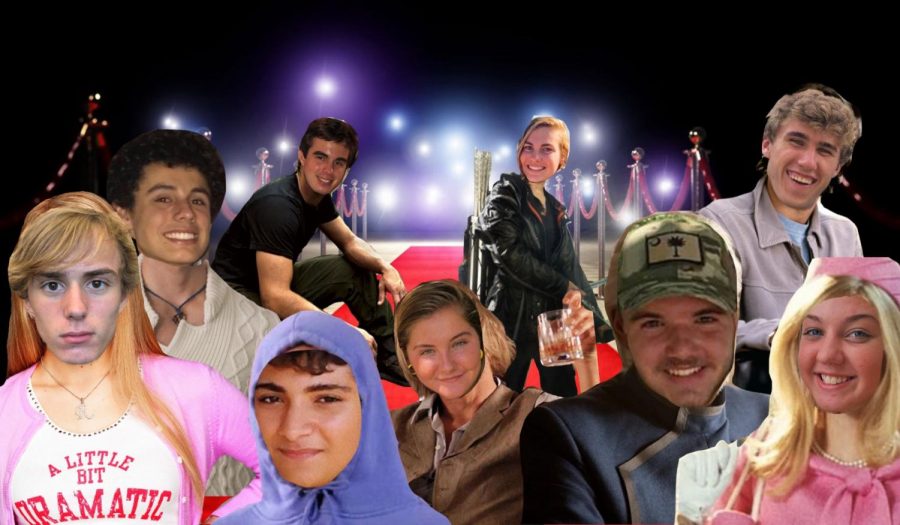 This was my most difficult task of 2021… recasting cult classic movies using current seniors. For those who don’t know, cult films “are known for their dedicated, passionate fan base which forms an elaborate subculture that engage in repeated viewings, quoting dialogue, and audience participation.” This includes movies like Jennifer’s Body, Scott Pilgrim vs The World, Napoleon Dynamite, and (almost) all of the ones listed below. Most of these castings are logic-based, although I will admit a few were gut feelings. Don’t take it too seriously or personally… ! Spread love and enjoy reading!

Oops! Not really a “cult classic” by technical definition, but I couldn’t do this article and not recast the mid-2000’s Battle Royale knockoff. (Not a diss… The Hunger Games is actually one of my favorites)

Katie Massie could definitely steal the role of the motivated, strong, and confident leading lady out from under Jennifer Lawrence. Whether it’s hitting the gym or perfecting her school work, you know she’ll get it done and do it well. Make sure she’s available next time you need someone to lead a revolution or overthrow a corrupt government!

HAH SIMP! Just kidding 🙂 Gatchmanfitness is kind, mega BUILT, thoughtful, and a great listener, making him the perfect Peeta 2.0. He would definitely purposely burn bread, get beat by his mother and run to you in the rain so your family doesn’t starve.

Hank would make the perfect Gale Hawthorne because of his loyal nature, hunting abilities, and (probably) his non-aversion to working in a mine if need be. He’s got your back and can shoot a buck. What more do you need?

Magnet’s resident golden boy, John Rowe, is the only man who could do the role of Finnick justice. He’s quick, cunning, charismatic, and easy to love. Whether it’s fighting the careers with a trident, or making a good impression on your parents, John is your go-to man!

I don’t think Hannah’s fighting anyone with an ax anytime soon but she’s definitely a bada$$ with great hair and a healthy hatred for “the man”. If you think Ms. Hughes wouldn’t flip the capitol the bird with a few choice words… you’re dead wrong.

Rachel as the clever mentor with a minor drinking problem just fits. (NOT because of the drinking problem 0_0)  She’s funny and caring but tells it to you straight, and at the end of the day, no matter what, you know she’s always got your back.

Next up, Mean Girls, the classic highschool story of friendship, bullying, manipulation, burn books, and busses. Don’t take this one too literally, none of these kiddos are mean girls…maybe.

Welcome your newest Cady Heron… Ben Whitely.  I could make up a bunch of reasons on how Ben is a math whiz who’s down to earth (which he is) but honestly it’s solely because he’s South African. That’s it. But trust me, you can never get enough of Ben; the limit does not exist. 😉

Aaron and John, the high school jocks with double names that aren’t actually double names. John may be quiet, but he’s witty, intelligent, wants you to be honest about your math abilities and, of course, not puke on his shoes. All of which makes him the perfect Aaron Samuels.

Collin the queen bee. I mean… come on. He’s a b-word with a big following. Jk! He’s got a prime sense of humor and may take you by surprise with his loyalty and thoughtfulness. But don’t cross him or he might frame you for the burn book or diss you on a three-way call with the other Plastics.

Olivia is the embodiment of all things great about Karen Smith. She’s the sweetest person you’ll ever meet with a great sense of style and almost always accurate awareness of when it’s raining. But in all realness, Liv is your go to girl when you need a hug, a giggle or just want to have fun!

Niko is the daughter of the inventor of the toaster struedel’s exact twin… except not really. He’s not much concerned with social suicide but he does know the hottest gossip and possesses the subtle but important traits of Gretchen. He’s funny, inventive and totally fetch!

Mohamed is hilarious, sarcastic and the only man at AMHS who would be bold enough to shout, “SHE DOESN’T EVEN GO HERE!” at a strange girl or dress as Santa to deliver candy canes to Glenn Coco. He’s caring, legendary and would look great in a pink shirt!

The legendary story of the “dumb blonde” who made it big at Harvard is the most iconic success story to date. Elle Woods broke down all hair-based stereotypes and became a top tier lawyer all alongside the love of her life. A tale worthy of the title “cult classic”.

While Josie isn’t your stereotypical “Elle Woods”, she is intelligent, motivated, outspoken, a future lawyer AND, as it happens, blonde. Don’t try and doubt her cause she’ll prove you wrong and look great doing it!

As another future lawyer of AMHS, Eliza Taylor makes the perfect choice for Vivien Kensington. No, she’s not a boyfriend-stealing meany, but rather sharp with an inclination to lead and an outspokenness that is unmatched.

He’s sweet, friendly, and, most importantly, one of the most educated people you’ll ever meet. Mills Jordan could talk politics till the end of time and you wouldn’t get sick of it. His kindness and intelligence make him the lovable TA’s perfect match!

All hail The Breakfast Club for providing the world with iconic characters, fashion inspo, and a heartwarming coming of age story about the power of listening. BTW…I would 100% cast Mr. Shue if he was a senior and not a substitute 🙁

Christina Dolan is sarcastic, hilarious and a downright frustration to all teachers trying to keep her in class. She’s the bad boy of AMHS who, on many occasions, has stated her willingness to be thrown in prison for “the experience” of it. However, she’s not solely a menace to the school staff, Christina is kind and compassionate while also able to kick your butt if need be. God bless the karate queen.

While Claire is beautiful, sophisticated and labeled as the “princess” of the group, she’s also a super dope lady with an edge. McCabe embodies all the good in Claire, she’s incredibly kind and thoughtful and can be the life of the party if you give her a chance!

She’s the gorgeous girl who stands apart from the crowd. She’s a little weird but in the best way possible! Allison goes against the grain and won’t be confined to a stereotype, just like Sophia Martuscello. While not completely emo or strange, Sophia aligns with the super dope traits of Allison Reynolds. She stands out and does things her own way, laugh all you want but watch out for when she takes over the world.

As one of my best friends, I can wholeheartedly call Simon Hughes a dork. However, trust me, it’s not a negative thing to be! Brian and Simon might not be the star quarterbacks but they’re definitely WAY cooler. Simon is a brainiac who knows how to party. He fills the void of the “nerd” while also bringing SO much more to the table. Need help with your math homework or someone to blast the music? Simon’s your guy.

Jock man Clark is the king of all good guys (at the end of the movie), similar to our very own Owen Conley. (Although Owen is MUCH smarter) He’s compassionate and will always defend you even when you’re not there. He’s a master athlete, a reliable friend, and of course has fantastic hair.