settle in because I have lots of opinions on this 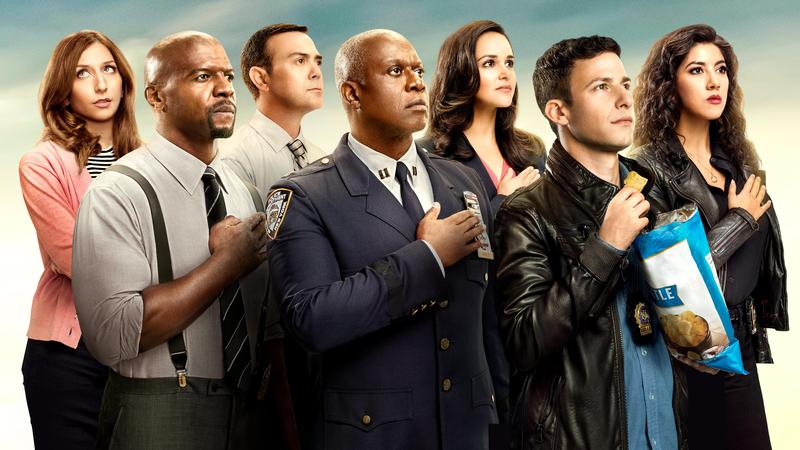 For those of you who do not know, Brooklyn Nine-Nine is a television show that airs on NBC on Thursdays at 8:30PM (it is also on Hulu if you are like me and don’t watch a lot of cable tv :)) It is technically a cop show, but in my mind it is comedy with a great crime solving sub-plot. That is the first reason why it is one of my favorite shows to exist. It manages to be funny and still be serious and discuss important topics.

So yes, reason one:

It is super funny. Their cold opens are the best I have seen. The actors are already naturally funny people and with the help of writers the comedy only gets better. The Top 10 Cold Opens are as follows:

Captain Holt has a dance off in the street

Jake forcibly has his frosted tips shaved off

Amy is late for the first time ever

Jake is stuck in an interrogation room with a perp

Jake has a lineup sing I Want It That Way

Hitchcock and Scully are, admittedly, two of the less acknowledge Brooklyn Nine-Nine characters. They are clumsy and more than slightly incompetent. But they are still funny and are sometimes able to give a genuine contribution to a case. This cold open showcases their best police work from when they were younger (spoiler alert: they were very attractive when they were younger :))

The cast is amazing. Andy Samberg is not only the main character (Jake Peralta) but he is also a producer of the show. Then there is Melissa Fumero (Amy Santiago) who plays a slightly anal, people pleaser so well without making it obnoxious. Joe Lo Truglio (Charles Boyle) is Jake’s “sidekick” but he is a genuinely quirky and easily loved person. Terry Crews (Terry Jeffords) is a muscular, yogurt obsessed goofball. He is seemingly easy to talk to and cares about his family more than anything. Chelsea Peretti (Gina Linetti) who is a comedian in real life is funny and eccentric. She adds personal style and a perfectly sassy attitude. That leaves Stephanie Beatriz (Rosa Diaz) and Andre Braugher (Captain Raymond Holt) who are quite possibly the most important characters not just because of their strong-willed personalities but also for the essential diversity they bring to the show.

Which bring me to the third and final reason I love this show; the LGBTQIA+ representation 😀

Captain Raymond Holt is an openly gay police captain with a loving husband, Kevin Cozner (Marc Evan Jackson). He often talks about his struggles with being the first openly gay police captain and how he was discriminated against not only because of his sexuality but also because of his race. Rosa Diaz is a detective who works for the Ninety Ninth Precinct. We do not find out she identifies as bisexual until Season 5, Episode 9, and it was a welcomed surprise. When Beatriz was asked about her character coming out she said,

“The images that we’ve been fed, culturally, as a society, about coming out have a tendency to be a lot of extremes, and I think those extremes are real. But I also think that there’s a middle ground that a lot of people I know live in, which is some of their family members were cool with it and didn’t blink an eye, and some of their family don’t even want to discuss it with them again.”

All together it is amazing to see a show that can do so many different things and remain upbeat and funny while still being real. It has made me laugh and cry and I have so much respect for the actors and the characters they portray. Much love for this show. If you haven’t seen this show and you have the ability to, YOU HAVE TO WATCH IT! It has seven season and counting and it most definitely worth the watch :))))