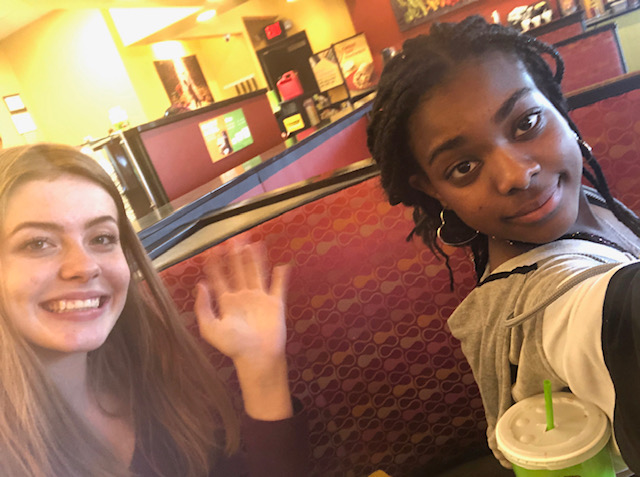 Rosie chose to make the scale out of 7 points and I’m not really sure why but here’s how I justify it.. The points are based mostly on the food but the vibe of the restaurant, price, and convenience are also taken into account.

Rosie:  It would be hard to find a magnet sports team member who has not gone to Moes before at least 6 of their games/matches. Moes just has the perfect vibe to decompress after spending a whole day pretending to learn in all your classes. Also if you look young enough you can go in and order from the kids menu and their prices are really reasonable, you can get a whole meal (main snack, cup of queso, drink and cookie) all for under 10 dollars. I also love that they have the most fun playlist out of all the places we visited, you will never walk in and not hear some  mixture of Queen, Outkast and Ariana Grande. Every visit genuinely feels like an out of body experience. Also the manager there is so funny and will always have a conversation with you!

Jordan: Moes is my favorite place to eat after school, but I disagree with Rosie about the vibe. The ambiance just isn’t it. Every time I go there there’s either 1) an entire magnet sports team 2) a single group of four older women or 3) not a single person. But, I do enjoy that kids meals come with cookies. Those snickerdoodle cookies are worth drinking out of the tiny kids cup.

Both of us: Similar to Moes, every single student who has ever played any type of sport at all at magnet has gone to Panera repeatedly, even if it was against their will. While a yummy bowl of Panera mac and cheese is perfect on a chilly fall day, Panera gets old quickly. If you like bread with absolutely nothing on it, you may fall in love with Panera quickly. The actual experience of being in the Panera by the school though is incomparable: the forty year old businesswoman who glares at you when you breathe too loudly, the 76 different SOA kids who filter in and out within the 30 minutes you’re there, the teenager working at the cash register that you think could’ve been in your elementary school but was too many years older than you to be sure….. It’s beautiful.

Rosie: Eating at Mellow Mushroom makes me feel like someone who will inherit at least 45 million after the death of their 78 year old uncle.  Out of all of the options, Mellow Mushroom is definitely the most expensive, but it also has the highest service quality. The waiters come to you and serve you your food, making it more of a restaurant than a quick bite for after school, and I would recommend coming here if it’s a friend’s birthday or you have a lot of time and money to kill. The pizza is good, you can customize it, it tastes like the 15 dollars you spent to get it. The vibes of Mellow Mushroom are the same as Target on any given day.

Jordan: I’ve never eaten at Mellow Mushroom right after school. It seems an odd choice but I like the pizza! I frequent the one in North Charleston after Tuesday home basketball games with my parents when I know my dad will be picking up the bill for my $15 pizza. Great service.

Jordan: 6 out of 7 for dinner. Right after school however, probably a 4 out of 7.

Rosie: This review isn’t for seniors because you all go there every single morning. For the underclassmen though I definitely recommend being 45 minutes late every day to get 4 chicken minis. However, going to Chick Fil A after school is a completely different environment. Before school feels hectic yet calm, and feels like a good way to start your day; going to Chick fil a after school feels like a desperate attempt to achieve structure. You cannot convince me that someone who goes through 8 hours of school, and then VOLUNTARILY gets in their car and drives to go eat inside of a Chick -Fil-A isn’t absolutely out of their mind. The workers after 3:30, although still very kind, seem tired and bored; my food isn’t being made with love, but rather bread and chicken. Walking in during the afternoon feels like I’ve discovered something horribly wrong.

Jordan: I love Chick fil a. I do agree that going to Chick fil a after school is a little odd because every time I’ve gone before basketball games it’s just been a few SOA kids and the boys basketball team. Weird vibe.