Opinion: College Baseball is “What Slaps”

Get on the couch this weekend and watch 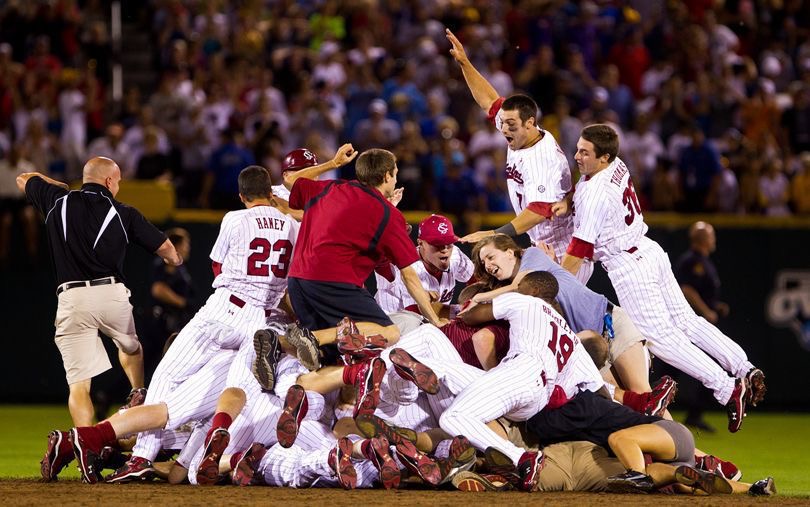 So I was talking to my brothers to the other day. None of us are particularly caught up in the modern music scene, though my tastes fluctuate. But on this day, we were contemplating a music article title “A Very Serious Investigation into the Difference Between ‘Bops,’ ‘Bangers,’ and what ‘Slaps.'” Obviously, the difference between bops and bangers is very nuanced. But when I came back to discuss this, Senior Emily Furtick pointed out that “what slaps” could be literally anything. Music slaps. Food slaps. Ms. Pinckney slaps. Urban Dictionary defines “slaps” (after a lot of digging) as “slang for some really good stuff”

But today we’re talking about something else that slaps, even when most of you don’t know it yet. College baseball. WAIT. Hear me out. We’re all about being rational here at the Talon. If you are still here, thank you. You know what’s up.

College baseball starts way earlier than the MLB (February 14th vs. March 26th) and with all the great turnover we love from college football. It’s the best of both worlds (queue the Hannah Montana videos). Now, as far as pace of play, it is still baseball. The games are upwards of three hours with lots of inaction, but the players have more to play for, the uniforms are more fun, and the schools still push their fun mascots and tailgating rituals into the spring. Below are the five reasons why this spring you will find yourself dropping the Netflix regiment for an evening of near-professional hardball.

Sure, no one goes right from college to the MLB now, but this is a sure-fire way to predict the next top pro prospect years in advance. In the 1920s, Lou Gehrig lit the Ivy League on fire playing at Columbia University, to the point that he earned a contract with the Yankees. More recently, Buster Posey starred at Florida State University from 2006-2008, going on to the Giants for playoff runs in 2010, 2012, and 2014. After winning the College World Series in 2010 and 2011 with South Carolina, Christian Walker toiled in the shadows of professional baseball before finally earning a starting spot on the Diamondbacks within the last two years. Three shortstops from the Southeast, Trea Turner (NC State, 2014),  Dansby Swanson (Vanderbilt, 2015), and Alex Bregman (LSU, 2015) have all gone on to quick Major League promotions, with Bregman an All-Star the past two years.  In the outfield, a 2011 Super Regional (more on this later) matchup between the universities of South Carolina and Connecticut saw two of the great present-day outfielders Jackie Bradley, Jr., (SC to the Red Sox) and George Springer (UConn to the Astros). On the pitching side, David Price, Sonny Gray, Stephen Strasburg, Aaron Nola, and Huston Street have all parlayed great college success into big MLB careers. Maybe your guys this year won’t win the World Series next year, but these guys will be big one day and you’ll be ahead of the game.

You live in a major sports market? I don’t. MLB games are nationally televised a handful of times per week with all other games appearing on local and regional channels around the team. College football takes up the whole TV schedule on Saturdays and the NFL on Sundays. Want the happy medium? Again, I give you college baseball. ESPN will air a few games nationally with the regional conference networks putting a few more out there, but a solid cable plan in South Carolina can also give you free access to the online SEC Network + and ACC Network Extra on Watch ESPN. There, almost every non-televised game for those twenty-nine nearby teams (SC, Clemson, Georgia, GT, UVA, UNC, Duke, etc) is live for your viewing pleasure. You can just watch three games and not be taunted by schedule saturation or you can watch fifty or so games (like me) with next to no issue.

Football teams play once a week, basketball teams two or three times. On the other side, MLB teams play about six. Well, college baseball teams have that rotation down. Most teams play a three game weekend series within a one-off game on Tuesday or Wednesday. The starting pitchers over the weekend are fairly fixed with the fourth starter typically doubling as a long-reliever or a guy that coaches are looking at as a future weekend starter. With that in mind, a good handful of bullpen arms may see time as a starter during the season. Otherwise, college teams have a bullpen as deep or deep than pro teams. The roster restriction is 35 players (as compared to now 26 in the MLB), and with only three or four starting pitchers, they can carry a plethora of right and left-handed relievers.

One of the treasures of the college baseball format is the postseason. A grand total of sixty-four teams can qualify for NCAA postseason play, which typically kicks off in late May or early June. The first round is divided into sixteen 4-team, double elimination tournaments hosted by the top sixteen seeds, called the Regionals, which typically go from Friday to Monday. Of the sixteen Regional winners, eight will host Super Regionals at their home field against one of the other eight. The “Supers” are best two-out-of-three formatted series with the winners advancing into the College World Series in Omaha, Nebraska. In Omaha, the eight remaining squads are divided into two brackets, each the same format as the Regionals but spread out over a week. The winner of each side will then play one another in another two-out-of-three series to determine the champion. The last five CWS champs are Virginia, Coastal Carolina, Florida, Oregon State, and Vanderbilt.

What many don’t understand is college baseball’s place in the pageantry of the college sports scene. Whereas college football takes up fall Saturdays, baseball is the sport of spring weekends. While the Clemson-Carolina, Duke-UNC, Florida-Georgia, and Michigan-Ohio State games may be some of the biggest rivalries in the world, they are not limited to just one or two sports. Our biggest in-state schools face off February 28th, 29th, and March 1st while the rivals in North Carolina have March 13th-15th. These games are met with tailgates and fans traveling from far and wide as would be the case in other major sports. In short, college baseball is all the fun of other college sports, just three times as long.

College baseball is most definitely, without a doubt, unequivocally, what slaps! Between the emerging star power, viewing accessibility, flexible schedule, excellent postseason, and college sports pageantry, it’s honestly going to be hard to stay away from college baseball this spring. Even if baseball isn’t your jam, check out a game. Look past the occasional inaction into the complex strategy on every pitch. Here are some big games this weekend.