We've all been there! Even the seniors! 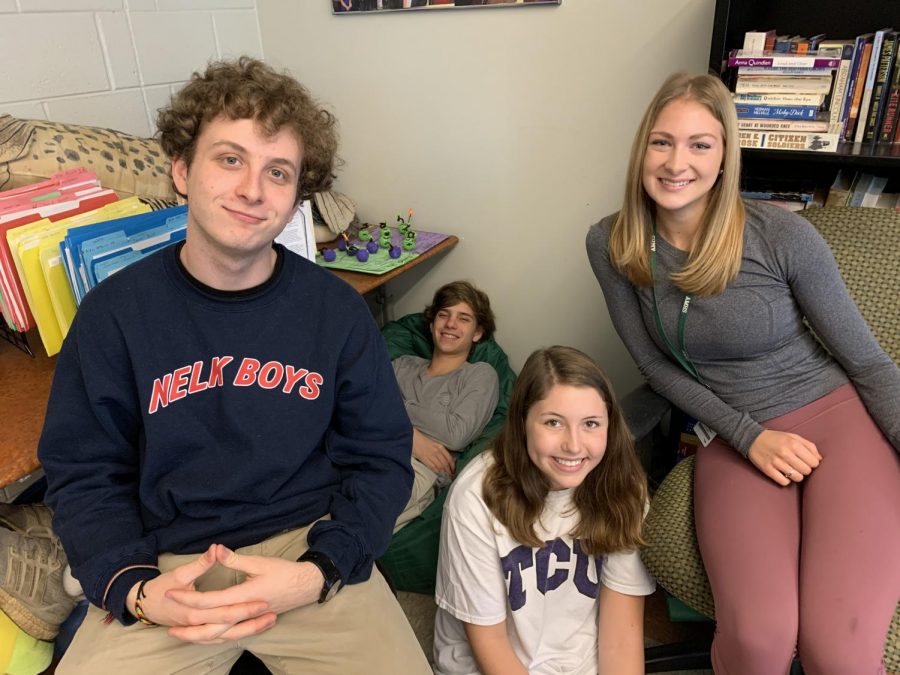 Jack, Will, Kaki, and Bailey have one piece of advice: "embrace it."

“I swallowed a tack in class during Sophomore year. I didn’t tell my teacher (Mrs. Novinger), but I lost my friendship with Mrs. Redfern because I left without telling her.” – William Price Jordan

“I used to have nasty voice cracks” – Andrew De Arellano

“During the Keys trip, Kaki, Ella, and I left all our bags and clothes at the hotel because we didn’t realize we were riding the bus to another city. We dropped everyone at McDonald’s and rode back with Mrs. Roop to pack our bags.” – Simone Kavarana

“I had my first kiss after freshman semi-formal at the water fountain. It was so geek. My eyes were open.” – Andrew De Arrellano

“On the Nantahala trip in 11th grade, we had just returned from a hike, and I had my backpack and wallet (I thought). I started looking around in my bag, and I couldn’t find my wallet. I started freaking out because it meant that I would need to get a new license, credit card, everything. I don’t know what happened. It was like a spark ignited. I threw my phone on the ground so hard that it shattered both sides completely. I was fuming. Mrs. Hooffstetter came over, searched my bag, and found my wallet in like four seconds. It was in a pocket I hadn’t checked.” – Jack Levenson

“One time freshman year, I swear it was the second day of school. I had alarms for all my class changes. I forgot that my ringtone was Party Rock Anthem. It started playing in front of the whole class, and I was so embarrassed.” – Susannah Ryan

“Nothing embarrassing has ever happened to me.” – Josephine Drake

“My brother and Jack Niesse had the same car. I tried to get into Jack’s car and sat on his hood for 45 minutes. Then my brother honked from our car. I mean, it’s a chunky red Ford explorer. No one else has those!” – Katherine Ray

“Freshman year for Valentine’s day, Godwins brought me chocolate and made me a card. When I saw him in the hallway, I ran the other way and avoided him for the entire day.” – Rosie Booker

“During my first day at Magnet, someone asked me if I had a terminal illness.” – Mason Leath

“I was at a track meet during Sophomore year and tripped in front of the entire Wando track team. It was really bad because I knew most of them from middle school” – Emory Gardner

“During my senior year textbook pickup, Ms. Pinckney asked why a junior was here (referring to me).” – William Price Jordan

“So here I am at Walgreens, and I’m going to pick up pictures. After I paid, the cashier reached out with change in a clenched fist. I thought we were tight, so I gave him a fistbump. He looked confused, and I realized he just wanted to give me my change back.” – Sloane Stoklosa

“I was hanging out with some friends, and I didn’t want to drive all the way home because it was like midnight. Jacob Norman said I could crash at his place, so I went over there. I woke up early the next morning for work. What I didn’t know is that he didn’t tell his parents, and I had never met them before. I walked downstairs, and I go to unlock the door. I hear a woman’s voice from the kitchen saying, “Nick?” (his older brother). At this point I was scrambling to unlock the door and leave, but I went into the kitchen and introduced myself. I had never met his mom, so it was really awkward.” – Eli LeRoy

“Sophomore year, I had chemistry class with Mina (Schaafsma). I had never had a class with her, so I had never really seen her. On the first day of school, I asked her where she transferred from.” – Sam Carson

“I would say all this vulgar stuff in freshman focus and Mrs. Roop would always hear me.” – Oliver Lewis

“In drama class sophomore year, I was talking to my friends about a group project member who was super lazy and never did any work. Then I turned around, and he was right there, listening to every word.” – David Roddey

“On the keys trip, Mr. McCormick asked me to name a state that starts with I, and I said Ohio.” – Reid Perrett

“One time this year. I tripped in front of a freshman” – Hannah Forman

“Freshman year, I turned a corner in the hallway and slammed into Max Windom. I was so embarrassed.” – Zoey Bennet

“Last year, I fell down the stairs during class change, but everyone helped me clean up my stuff” – Zachary Buessing

“I went up to Michael Hammer thinking he was the new Swedish kid, Christian, and I asked him a bunch of questions about Norway. That’s the worst part. I didn’t even get the country right. Anyway, he never corrected me, so he definitely thought I was just being weird.” – Caroline Fair