Most Anticipated Movies of Summer 2018

Check out a sneak peek of four of the most anticipated sequels of the summer! 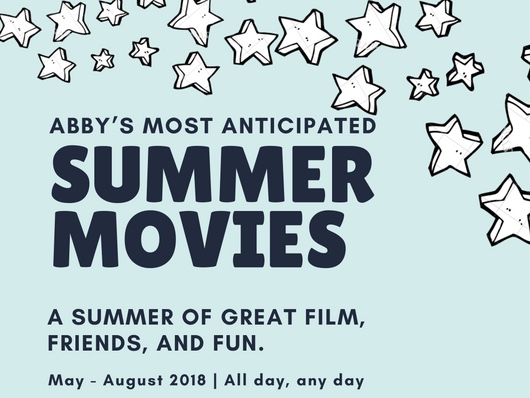 In the middle of July when the heat is excruciating and you can’t walk outside without being drenched in sweat, there’s only so many options of things to do to keep the boredom at bay. You could go to the beach, play mini golf at Charleston Fun Park, or get a head start on your summer reading, but my favorite summer activity is going to the movies. Nothing quite beats the abundant, arctic air conditioning, comfy reclining seats, and butter drenched popcorn. Here is a preview of four of the most anticipated movie sequels of 2018! Make sure to check them out this summer so you can sit back, relax, and enjoy the show!

On the heels of Rian Johnson’s widely popular Star Wars: The Last Jedi, the franchise’s newest stand alone film comes 41 years after the original Star Wars movie. The film focuses on the adventures of young Han Solo, Chewbacca, and Lando Calrissian. Although this film has had many roadblocks including a change in directors once filming had already begun, many people are still excited for the newest addition to the Star Wars universe. In 2016, the first stand alone film in the franchise was made, Rogue One, as a part of the Star Wars anthology series. These films serve as fillers to satisfy Star Wars fans until the next film in the sequel trilogy comes out, as well as to provide even more depth to the characters and world of Star Wars in general. The first sneak peek of Solo came during the 2018 Super Bowl, generating even more anticipation for the movie. Solo stars Alden Ehrenreich, Emilia Clarke, Donald Glover, and Woody Harrelson. Be sure to check out the newest Star Wars film in May!

Everyone’s childhood dream is finally coming true: Disney is releasing the sequel to the wildly popular animated superhero movie: The Incredibles. The sequel comes 14 years after the first movie, but the plot picks up right where it left off. The new story focuses on Jack-Jack’s newly discovered powers as well as a new villain in town by the name of Screenslaver. Many people involved with the first film are returning for the second including director Brad Bird, composer Michael Giacchino, and actors Samuel L. Jackson and Holly Hunter. Even though Pixar movies are usually geared for kids, the movie theater for Incredibles 2 will definitely be filled with an equal amount of teens/adults anxious to see the sequel of their favorite throwback movie. The 14 year wait for The Incredibles sequel will all be over on June 15!

This summer is certainly one of sequels or additions to prior movie franchises. Jurassic World: Fallen Kingdom follows the 2015 film Jurassic World and is the fifth installment in the Jurassic Park series. The sequel focuses on Claire Dearing’s organization created to save the dinosaurs who have been roaming Isla Nubar for the past four years. One of the biggest conflicts in the upcoming film is the impending volcanic eruption and how to get the dinosaurs off the island before the natural disaster. This film will also feature more dinosaurs than any other previous Jurassic Park films. Director, J. A. Bayona, wanted to add another element to the movie and include some on-screen creatures that fans of the series have never seen before. Additionally, Universal Pictures has already announced that the third film in the Jurassic World trilogy will be released on June 11, 2021. So get ready and gear up to take a trip to the Jurassic Park universe for at least two more times!

This summer also offers a film for all of you musical fans! The sequel to Mamma Mia is being released in July, but the trailer has already offered a glimpse of the excitement to come. The sequel takes place ten years after the first movie, and the plot centers around Sophie’s life running her mother’s villa. We also learn in the trailer that Sophie is pregnant and planning to embark on a journey to learn more about her mother’s past. Arguably, the best part of the first Mamma Mia movie was the popular ABBA songs that drove the story and made everyone want to get up and dance or at least sing along. Some ABBA songs that are confirmed in the sequel are “Waterloo,” “Mamma Mia,” “Dancing Queen,” “Fernando,” and “Kisses of Fire.” Many other songs were being considered, but you will just have to check out this movie in July to see which ones made it in!

Although this is just a small representation of the movies coming out this summer, these are four of the most highly anticipated sequels. Be sure to go to your local movie theater and support the film industry by watching one of these films this summer!