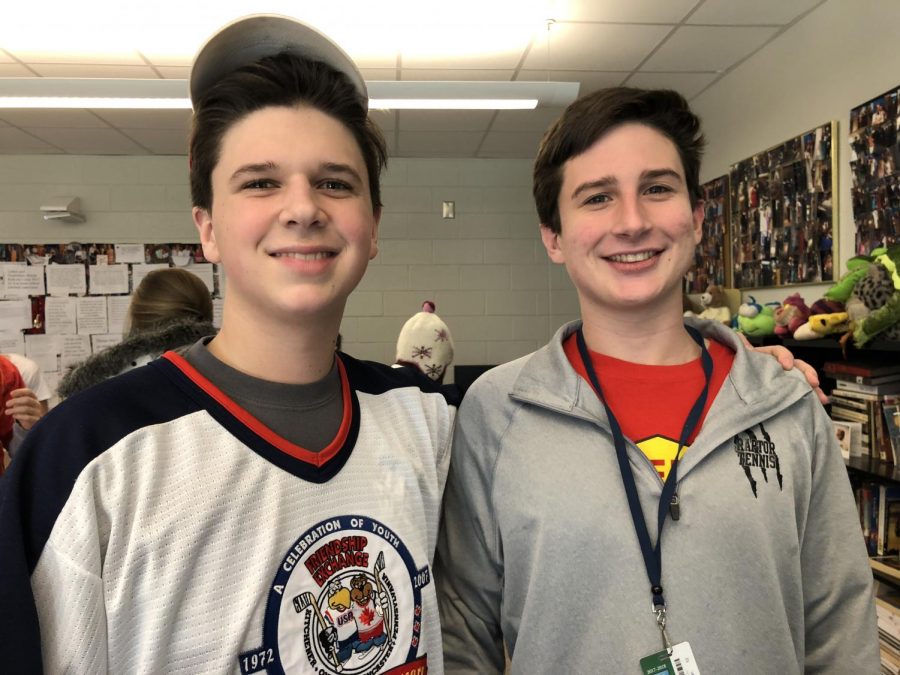 As we enter this long, cold, dormant period in school, we all–seniors especially–need a little “pick-me-up” to stay excited about the upcoming weeks. Lucky for you, I have found a tri-weekly edition to satisfy your soul: PodCorp. Daniel Lehman and Will Donnellon have created a revolutionary podcast that is guaranteed to cheer you up and make you laugh, or your money back. The creators put in hours of hard work into the podcast every single day to make it as inclusive and interesting as they possibly can. Consequently, they are able to keep listeners intrigued by starting necessary conversations, hosting relevant “special” guests, and they even have a corresponding Instagram (@dancorp_) which puts faces to Daniel and Will’s infamous voices. Without further ado, here is an all-inclusive review of our new favorite podcast:

Coming in at a strong 12 minutes and 45 seconds, some may call it a test run, but I personally find episode number 1 to be the best; the limited time allowed for a more brief and precise cast. As you begin the episode, you soon learn the docket for the day. To name a few: BE, Semi, and so much more. My favorite part of episode 1 would have to the Bishop England talk portion. Dan and Will draw up a very plausible conspiracy about whether or not the locker rooms at BE have cookies…. But the real question is if they call them “biscuits” because they are unable to eat something as plebeian and ordinary as cookies. Along with the cookie conspiracy, the boys discuss holding an underground basketball game to settle which school is actually better after the so called “snow” days. The episode comes to an abrupt end with the sound of the school bell. Like Macbeth, Dan and Will had to decide to use free will as the bell rang.

After a short first episode, episode two comes in at nearly 30 minutes of non-stop entertainment. The boys discuss Will’s lowest of lows. Will discusses he “hit rock bottom” after eating a pickled onion he found in the trash. Will admits this tasty treat tasted like “asphalt, dirt, and a little bit of pickled red onion.” Daniel then begins scrutinizing Will for almost 20 minutes. He gives Will a hard time for eating his boogers, but Will insists that “everybody does.” Episode 2 also includes PodCorp’s first ever guest, Ian Stadtmueller. They discuss Ian’s unannounced arrival at their job, Louis Barbeque, as well as Ian’s explanation for his speeding ticket on the way home from West Virginia. The group also shares their “top threes” of the week, but to find out what they are you have to listen. If you want to watch the video showing the face that ate the trash onion, please check out @dancorp_ on Instagram.

Episode three begins with Daniel’s disgust at hackers trying to get into his email, along with the success in their plan to get Ian a date to semi. The episode also goes after some publicity as they interview a YouTube sensation, Pack A Puncher. The hosts discuss many new names for his channel to include more than just Zombies. Some of the new ideas they hatched were Pack a Luncher, Snack a Puncher, Pack a Nestle Cruncher, and many more food-related channel names. Daniel and Will ask Seth about a controversial tweet he made about fellow YouTuber, Logan Paul. Seth also reacts to haters’ comments on his channel. The boys are really going out of their way to get more publicity for the cast, but when Pack A Puncher was asked to give the show a shoutout on his channel, he politely dismissed the question. Although episode three has the least amount of listens, I think it will soon gain popularity with Pack A Puncher’s fans as they can get the inside scoop on their favorite YouTuber’s life.

These summaries are just the beginning. If you want a good laugh while listening to a wholesome pair, listen to these three episodes and more on SoundCloud: https://m.soundcloud.com/user-297658045