Charleston's only minor league hockey team is picking up the pace and skating to success. 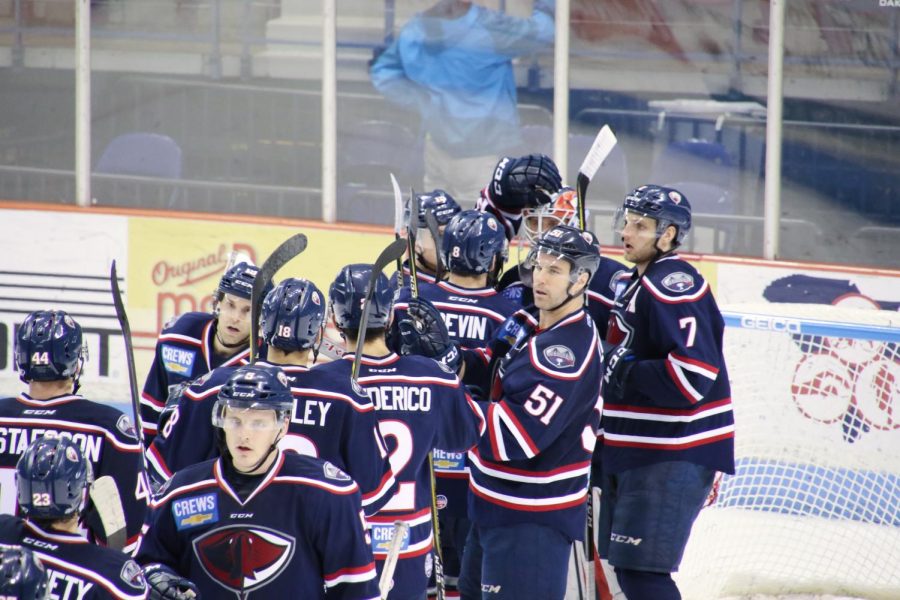 The Stingrays celebrate their weekend of wins.

The South Carolina Stingrays are known for being a consistent hockey team. They have qualified for the ECHL playoffs 24 out of their 25 seasons and won the Kelly Cup 3 times (tied for the most ever). The 2017 – 2018 team is no exception as the Rays are in second place in their division and on track for success again this year.

This past weekend, the Stingrays showcased their talent as they swept the series, winning all three games against the Orlando Solar Bears and Norfolk Admirals. The team drew in large crowds for the games with their promotions each night, and Saturday’s Military Appreciation game saw the North Charleston Coliseum filled with 8,831 fans, creating an electric environment.

Friday’s game saw the Rays score their first goal in 102 minutes since they were kept scoreless during Wednesday’s away matchup in Jacksonville. This initial goal started an explosion of scoring within the first three minutes of the final period, seeing Kelly Zajac, Hampus Gustafsson, and Danny Federico put points up on the board for the Stingrays. Although the Rays have faced the Orlando Solar Bears four other times this season, this was the first that resulted in a South Carolina victory. The Rays were able to carry this momentum into the next night, finding the back of the net five times, contributing to the thrilling environment.

The atmosphere on Saturday was a completely different experience than all of the other games this season. Every seat in the lower bowl was filled, and a layer of excitement covered the whole arena from the ice level to the rafters. When the lights dimmed before the national anthem, the stadium was illuminated by light up American flags, filling the crowd with vibrant reds, whites, and blues. The lines to buy merchandise and food seemed to go on forever as new fans and season ticket holders alike poured into the North Charleston Coliseum, ready to cheer on the Rays to a victory over Orlando.

The scoring of the evening opened up with a power play goal from Kelly Zajac right before the close of the first period. The next point added to the scoreboard marked a milestone. Nick Roberto finally scored his first professional goal. The former Boston University forward has been waiting the whole season for this moment and he finally found the back of the net. Another important factor in Saturday’s pack the house and military appreciation night was strong goaltending. Parker Milner stopped 38 shots on goal, earning him a shutout and the first star of the game. At the end of the night, the Rays capitalized on two out of four power play chances and scored two shorthanded goals resulting in their 5 – 0 victory.

The weekend was rounded out with a solid 3-1 win against the Norfolk Admirals with Adam Carlson between the pipes. Once again, Zajac opened the scoring for the Rays in response to Norfolk’s Darik Angeli’s goal, earning Zajac his fourth goal of the weekend. This game was also the team’s annual “Undie Sunday” promotional game. Following the Rays first goal, fans tossed packages of new socks and underwear onto the ice to be donated to the Charleston Youth Development Center. In the end, Carlson blocked 46 out of 47 shots, providing the Rays with their third victory of the weekend. All three goaltenders earned wins and the Rays came out of the weekend with six more points in the standings.

All three wins this weekend secured the Stingrays spot as the top defensive unit in the ECHL for now. They have a 90.6 % penalty kill rate and have only let in 16 power play goals this season out of 170 chances. This has also allowed them to have the best home record of all South division teams with a home record of 15-4-3-0. The Stingrays hope to continue this success through the rest of the regular season and into the playoffs.

The Stingrays are back home in the North Charleston Coliseum on February 16. Come out and support hockey in the Lowcountry in one of the eleven remaining home games!