The Talkative, Friendly: Evelyn B

Evelyn B: The B stands for Bi except I just like B and that's all. 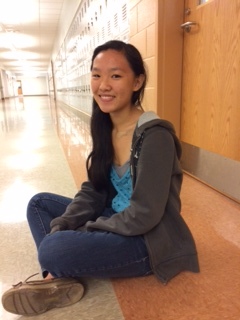 Evelyn Bi who is a freshman at AMHS strongly dislikes her last name and prefers to only go by Evelyn B. She is currently fourteen years old and will turn fifteen in April, which she hates because no one can celebrate it at school since it is over spring break. Her favorite class is biology with Mr. McCormick mostly because he likes her so it makes the class more enjoyable. Evelyn prefers science over history and for this reason Global Studies is her least favorite class, because she believes it is not relevant to her life. She currently is on the cross country team, which she enjoys because she isn’t the worst, but at times she feels like she’s drowning in her own sweat. Evelyn thinks the biggest difference between middle school and high school is people’s humor. In middle school everyone was so sarcastic and that is what she is use to, but at Magnet people seem to be offended by what she says or their humor is just “so lame it hurts her soul.” In ten years from now Evelyn thinks she will be in graduate school with a bunch of friends. She prefers dogs to cats and thinks both grits and oatmeal are nasty. She also likes a lot of upperclassman such as Chris Sacha and Leotie Hakkila. The first place she would teleport to is Sheffield England to see Alex Turner from the Arctic Monkeys, which is “the best English rock band ever”. Evelyn is right handed and prefers fruits to vegetables.