We’ve Been Played: The Moon Landing was Faked 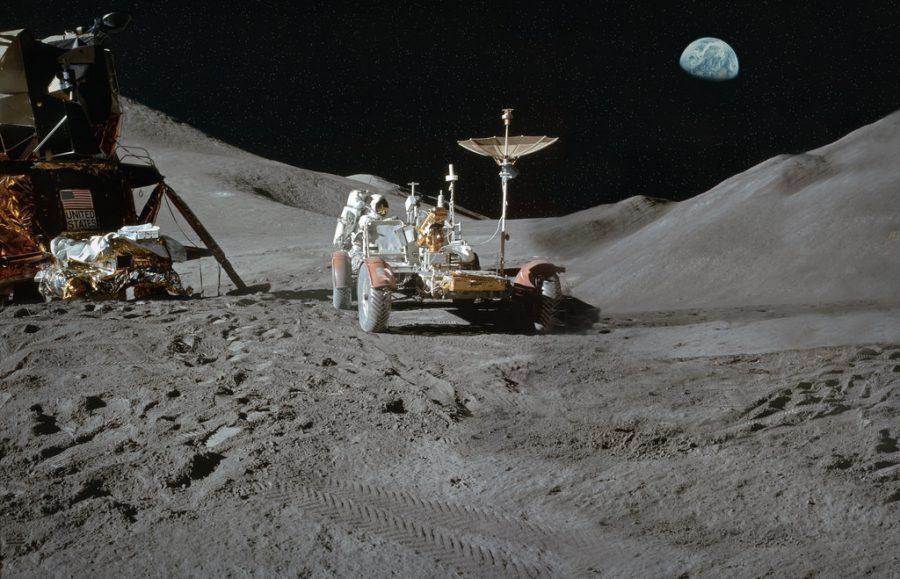 It all began September 12, 1962 when President Kennedy gave a speech now known as the “We choose to go to the moon” speech where he told America and the world that we will go to the moon before the end of the decade. NASA was promptly given a $5.4 billion dollar budget to accomplish the goal of beating Russia to the moon.

Leading up to the successful Apollo 11 mission to the moon was a string of fatal accidents. As late as 1967, 2 years from landing on the moon, NASA was reportedly years behind schedule. The Apollo 1 had just killed 3 astronauts in a fire. Gus Grissom, one of the astronauts killed, was sure that America would never make it to the moon because of all the disasters already plaguing the mission while it was still on Earth. Neil Armstrong himself almost died during a failed Lunar Lander test in May of 1968. How could NASA expect to successfully land on the moon when they could not even successfully test their equipment on Earth? But just one year later after almost 8 years of scrambling to catch up to Russian advancements NASA successfully sends 3 astronauts to the moon. These astronauts return safely with moon rocks and photographs.

As in every conspiracy there are mysterious deaths. This conspiracy is no different. The aforementioned Gus Grissom was killed in the Apollo 1 fire. His family is convinced that he was murdered because of his vocal skepticism that America would ever make it to the moon. Thomas Barron the NASA safety inspector who wrote up a critical report on the Apollo 1 fire and the state of the program as a whole died in a car accident only a week after he wrote the report. The report then vanished…

The Apollo landings sent a total of 12 men to the moon over 45 years ago yet no astronaut has been back since. The moon is 240,000 miles from the Earth; no one travels more than 400 miles above the Earth now. Even with all the danger and complexities that the Apollo landings entailed all 12 astronauts returned safely from traveling 600 times further than anyone ever. 14 astronauts died in the space shuttle program in which no one traveled more than 200 miles from the Earth.

The stated reason NASA does not go back to the moon is the lethal amounts of radiation supposedly present on the moon’s surface and in the Van Allen belts, an area of radiation between the Earth and the moon that is undoubtedly lethal. In a 1994 press conference then NASA administrator Dan Goldin admitted that NASA needed to find a way to combat the space radiation if anyone was going to go outside of Earth’s orbit in the future, even though 25 years before NASA had sent 12 men outside of Earths orbit into the dangerous radiation filled space. The most famous of whom were Buzz Aldrin who is well into his 80’s and Neil Armstrong who died from complications of cardiac surgery at the ripe old age of 82. In 2005 NASA again reiterated that radiation was a “showstopper” for ever going back to the moon. NASA could safely go to the moon using less technology than is contained inside of a iphone, but now 45 years and countless advances later moon landings have been dubbed impossible?

Some of the most widely accessible and concrete evidence against the moon landing is the photographs. The pictures contain unexplained errors including but not limited to a missing blast crater underneath the Apollo’s rocket engines, light sources coming from more than just the sun, the same exact background in two photos supposedly taken miles apart, and rocks marked with the letter C. Some even believe that NASA hired Stanley Kubrick one of the most famed film directors in the world to direct the moon landing. This is plausible because Stanley Kubrick had recently released his ground breaking film 2001: A Space Odyssey, which could be viewed as a practice run for his biggest film yet, The Moon Landing. The Moon Landing was viewed by 600 million people across America.

The last and most mysterious of the evidence backing up a faked moon landing is the lack of evidence for the Apollo landings. If you had just designed a spacecraft that successfully went to the moon would you lose the design? NO! You would make high quality copies of it and put it in a vault. Well, none of the original film of any of the Apollo missions survives. There are only grainy 3rd and 4th generation copies of the original. The original blueprints for the lunar module, lunar rover and Apollo hardware are gone. Everything we know about the moon landings is directly from NASA. There are no independent sources that have independently checked and verified that man has actually walked on the moon.

NASA’s Apollo program involved thousands of people. How could they hide the fact that it was all fake from thousands of people? Why didn’t Russia challenge the fact that we went to the moon? Who put the laser reflectors that are still utilized today on the moon? How did moon rocks get to Earth? These are all questions that people ask to try and get to the bottom of the mysterious of the moon landing.