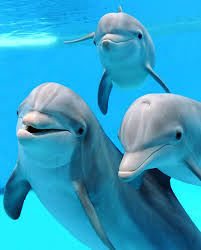 Todd Endris was surfing at the Marina State Park off the coast of Monterey, Calif. when he encountered a great white shark. The 12-15 foot shark ran into the surfer multiple times, even mauling his right leg and back when a pod of dolphins arrived and began circling Endris.  The surfer had been sitting on his board when the shark approached and bit his leg; the shark then returned and bit his torso. The third time, the shark came back in an attempt to bite off his leg. The dolphins swam over to the surfer and began circling the board, fending off the shark and allowing Endris to get back on the board and return to shore. Endris described the event as “truly a miracle.”. Despite extensive injuries and months of physical therapy, Endris was able to return to surfing just months after the attack. This is not the first time dolphins protected humans from predators; in fact in 2006 four lifeguards were rescued in New Zealand from multiple sharks by a pod of dolphins forming a protective ring around them. The shark remained in the Marina State Park, “I wouldn’t want to go after the shark anyway,” Endris said. “We’re in his realm, not the other way around.”